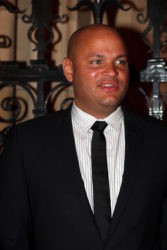 Stephen Belafonte has been ordered to leave his Los Angeles home and stay away from his wife and children.

The film producer received the order from a court honoring a restraining order by the former
Spice girl, whose real name is Melanie Brown.
Brown revealed she had endured several acts of violence , punching her on one occasion .

Melanie Brown said she would cover up her bruises before going on television , adding ” he will beat me down to let me know he was in charge”.
The star went further to claim that Belafonte often forced her to engage in threesomes, blackmailing her with threats to expose her private life to the public. Mel B also alleges that Belafonte paid off their nanny after urging her to abort their child .

The star claims to have swallowed a bottle of aspirin as “emotional and physical exhaustion”. Belafonte has a bad track record of violence that makes his wives claim look credible.

However, his past violence does not prove her claims of physical violence is true. She could in theory making the claim out of spite. As possible as this is , it is very difficult to think she would fabricate it just to win an injunction.

Chances are that her allegations are true because of his past. The details are too specific to be a frame, he can sue for damages if they are false. Bottom line is that the film maker appears like every woman’s worst nightmare, and the burden of proof is now on him to show that the claims are false.