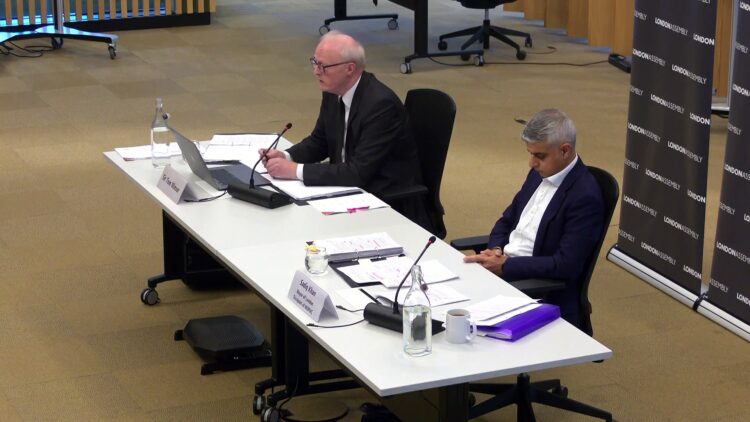 Dame Cressida resigned on February 10 after clashing with the mayor on the Met’s response to a report exposing misogyny, bullying and harassment by 14 officers at Charing Cross police station, amid growing concern that it was losing public confidence.

Sir Tom, formerly Her Majesty’s Chief Inspector of Constabulary, was asked by the then Home Secretary Priti Patel in March to establish the “full facts” of Dame Cressida’s departure after Sir Stephen House, then the Met deputy commissioner, accused the mayor of acting unlawfully.

At the London Assembly police and crime committee yesterday, Mr Khan said it was a “matter of public record” that Sir Tom has a “close association with the former commissioner,” meaning the report was saddled by a conflict of interest.

Dame Cressida said previously that she had been forced to resign after Mr Khan said he had lost confidence in her leadership over her failure to recognise and address problems of misogyny and racism in the force.

Sir Tom’s report into the handling of her exit claimed that Mr Khan had not followed “due process” when he withdrew his support.

He told the committee that the mayor was responsible for the delay in the report’s publication from six weeks to nearly six months.

“The degree of engagement was remarkably slight,” said Sir Tom, who added that he was only able to interview Mr Khan for 90 minutes.

Hitting back at the claims, Mr Khan said: “The view of me and others is that the process is flawed. We all know it’s a matter of public record, Sir Tom’s close association with the former commissioner.

“In Sir Tom’s own words, he’s given more weight to those of police officers than from others and the conclusions of Sir Tom weren’t a surprise to many.”

He later told the committee that details of deeply offensive racist, misogynist and homophobic messages shared by officers based at Charing Cross being published by a watchdog in January were “the straw that broke the camel’s back.”

Sadiq Khan and Sir Tom Winsor locked horns over a report which concluded the former commissioner of the Metropolitan Police felt “intimidated” into quitting her post.

The findings of the former chief inspector of constabularies’ report into the resignation of Dame Cressida Dick were contested by the mayor of London at a meeting of City Hall’s police and crime committee today (
The mayor previously claimed Sir Tom’s findings were “clearly biased and ignored the facts”.

During a series of fiery exchanges, the ex-top cop inspector and the mayor traded blows in front of London Assembly members while seated yards from each other at the same table.

Legal powers had been used by the committee to summon Mr Khan to answer questions on the matter – with the mayor threatened with a fine or even prison time if he failed to attend.

It is the first time a sitting mayor has been formally summonsed.

During the hearing, Sir Tom rejected Mr Khan’s accusations of bias as “absurd” and said: “The idea that the facts have been ignored over 115 pages is just not sustainable.

“The facts have been gone into, on a minute-by-minute detailed basis. They could not have been more painstakingly and thoroughly analysed.

“The idea that I have political affections or allegiances is absurd.

Sir Tom told the assembly: “The mayor says that my close association with Cressida Dick is well-known.

“In 12 years in policing, I think I have had one social occasion with Cressida Dick.

“That is when she invited me for dinner at the very end of my term of office as chief inspector of constabulary to say thank you for 12 years of service.

“It was a pleasant dinner – we didn’t discuss this.”

He continued: “There have been no other social occasions. The idea that we are friends is just not sustainable.”

He also told the committee he had had close associations with senior Conservative and Labour party figures and had been a member of the Labour Party “on and off, for 30 years – indeed I became a member 10 years before the mayor was old enough to vote.”

He added: “I was appointed as rail regulator and international rail regulator by John Prescott, who is hardly some soft-Left New Labour apparatchik.”

His comments came in response to Mr Khan, who told the committee: “The view of me and others is that the process is flawed, the investigation is biased, it ignored many facts.

At the end of the meeting, Unmesh Desai asked Sir Tom to clarify when his dinner with Dame Cressida took place.

He said: “I think it was in the last month of my term of office. I left on March 31 – I can’t remember exactly when.

“I was asked by the Home Secretary to do this report on March 25.

“The dinner with Cressida Dick was before my appointment to do this work.”Asked whether he would like to write to the committee to clarify his words, Sir Tom said: “That’s my answer, I don’t need to clarify it. It’s perfectly clear.”