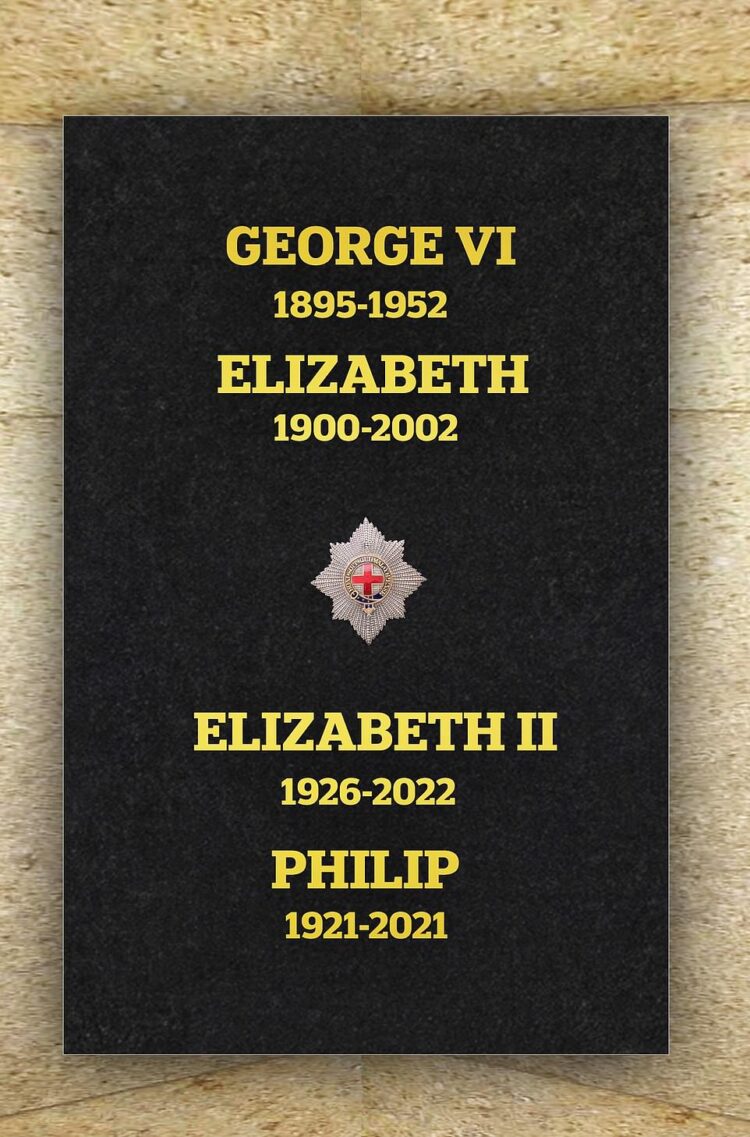 The Queen’s name has been inscribed on a new ledger stone in the Windsor chapel where she was buried on Monday.

The 96-year-old sovereign was interred in a transferring personal ceremony at Windsor’s King George VI Memorial Chapel on Monday evening.

An inscribed slab laid into the ground had beforehand been marked with the names of the Queen’s dad and mum in gold lettering on black Belgian marble.

The late monarch was buried beside her husband Prince Philip in St George’s Chapel on Monday evening in a private family service after the public splendour of her state funeral.

Multitudes of mourners queued up for several hours to pay their respect to the queen.

On Monday, crowds of mourners gathered at Westminster, and walked all the way to Hyde Park, paying their final respect to Britain’s longest reigning monarch.

The inscription on the ledger stone in the George VI Memorial Chapel now has the names of the Queen, her mother, Elizabeth, the late Queen Mother and her father, George VI, and Prince Philip, along with their years of birth and death, Buckingham Palace said.

Buckingham Palace said the stone replaces a black slab naming George VI and Elizabeth, the Queen Mother. The fresh stone set into the floor also includes the dates of when all four were born, along with the years of their deaths next to their names.

All four royals were members of the Order of the Garter, which has St George’s Chapel, located in the grounds of Windsor Castle, as its spiritual home. The order of chivalry dating back to medieval times is made up of the monarch and other senior figures including former prime ministers and former military chiefs.

When Philip died in April 2021, his coffin was placed in the Royal Vault of St George’s so that it would be ready move to the memorial chapel when the Queen died.

The Queen’s sister Princess Margaret, who died in 2002, was cremated and her ashes were initially placed in the Royal Vault, before being moved to the George VI memorial chapel with her parents’ coffins when the Queen Mother died just weeks after her.

The chapel is a pale stone annexe that was added on to the north side of the building behind the North Quire Aisle in 1969. The Queen (second from left) pictured with her father King George VI, mother Elizabeth, sister Princess Margaret and the Duke of Edinburgh (far left)
A peak audience of around 28 million UK viewers tuned in for the Queen’s state funeral at Westminster Abbey and committal service in Windsor on Monday.

However, her burial took place in the evening in a private service attended by King Charles III and the Royal Family.

After a day of military spectacle and the Queen’s final journey from London to Windsor, and a committal service, the King and the royal family said one last, private, goodbye at 7.30pm.

Windsor Castle is currently closed to the public and will reopen on September 29.

King Charles decreed on 9 September, the day after the Queen died following her 70-year reign, that a period of mourning would be observed until seven days after the funeral.

He is believed to have flown to Scotland on Tuesday with the Queen Consort to grieve privately.

Other members of the Royal Family are not expected to carry out official engagements, and flags at royal residences will remain at half-mast until 8am after the final day of royal mourning.

Windsor Castle is currently closed to the public and will reopen on 29 September.