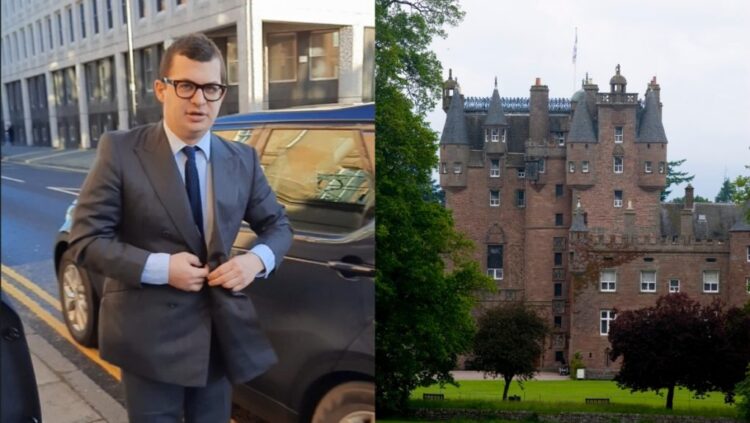 The Queen’s cousin, twice removed, Simon Bowes-Lyon, has been placed on the sex offender register, after pleading guilty to assaulting a woman in his ancestral home in Angus.

Bowles-Lyon, 34, forced his way into a sleeping woman’s room and assaulted her during a travel PR weekend he was hosting at the 16,500-acre estate.

Lyon, a great-great nephew of Queen Elizabeth, The Queen Mother, carried out a sustained attack on the 26-year-old woman which lasted more than 20 minutes.

On Tuesday, the wealthy aristocrat was granted bail and placed on the Sex Offenders Register as sentence was deferred for reports. Sheriff Alistair Carmichael also ordered Glamis Castle to be assessed for its suitability for a tagging order.

Bowes-Lyon, 34, who is known as ‘Sam’ and described himself to police as a ‘farmer,’ is a great-great nephew of Queen Elizabeth, The Queen Mother.

The multi-millionaire landowner, who walked behind Prince William in The Queen Mother’s funeral cortege as a 15-year-old, stood with his head bowed as the charge was read to him.

He admitted that on 13 February last year at Glamis Castle he sexually assaulted a 26-year-old woman, who cannot be identified for legal reasons.

He admitted repeatedly pushing her onto a bed, forcibly grabbing her breasts, repeatedly trying to pull her nightdress, pushing her against a wall, touching her bottom and vagina and trying to kiss her.

Fiscal depute Lynne Mannion told the court: “The accused is the Earl of Strathmore. He resides at his ancestral home of Glamis Castle. He divides his time between the castle and a property in London.”

She said Glamis Castle had been chosen to host several people over a weekend for a feature for a luxury lifestyle magazine. They enjoyed gin tasting, helicopter rides, shooting and a tour of the castle.

On the first night, the complainer noticed no-one was talking to Bowes-Lyon during dinner and she engaged him in conversation. He took her outside to show her one of his classic cars.

The following evening there was a black tie dinner and, after the victim went to bed, Bowes-Lyon carried on drinking before arriving uninvited at her room at 1.20 am.

Mrs Mannion said: “She was asleep and was woken by knocking at the door.” She said Bowes-Lyon told the woman: “It’s Sam. It’s important. Please let me in.”

“She thought something was wrong so she got up. It was pitch black. The second she opened the door he pushed his way in and pushed her onto the bed.

“He was very drunk and smelled of cigarettes. He told her he wanted to have an affair. He grabbed her breast and nipple very hard. He tried to pull her nightdress up.

“She went into the en-suite to get away but the accused followed her, stopped her closing the door, and lit a cigarette. She squeezed past and went back to the bedroom.

“He pushed her against the wall and grabbed her nipple again, so hard that it still hurt the next day. He grabbed her bottom and her vagina.

“She raised her voice in the hope that another guest would hear her. She panicked because she did not know the layout of the castle.

“She had no signal. He refused to leave.” Bowes-Lyon told the terrified woman: “I’m going to f**k you.”

“He got into bed and began pulling at her. She had to keep pushing him off. He told her she needed a ‘shafting’. She told him to ‘f**k off.'”

Bowes-Lyon called her ‘a rude, mean, bad and horrible person’ and told her she could not tell him what to do in his own home.

After more than 20 minutes she eventually managed to get him out of her room – in his private wing – and sent a series of  desperate messages, asking her colleagues and boyfriend for help.

Bowes-Lyon returned and tried to get into the room again, but she managed to get hold of the publisher in another part of the castle and he came to help.

He later reported that she was “distressed” when he spoke to her and that Bowes-Lyon had fallen asleep when he went to confront him about the incident.

The woman fled the castle in the morning and flew home to immediately report the matter to police. Both Police Scotland and the Metropolitan Police were involved in the investigation.

Bowes-Lyon emailed an apology to the woman after being told to by the publisher and he offered another apology for his behaviour yesterday in court.

The flashy aristocrat, who boasts about his love of fast cars and holidays with reality TV stars, and was named in Britain’s 50 Most Eligible Batchelors by Tatler in 2019, gave police a ‘no comment’ interview at Dundee HQ.

Counsel John Scott QC said: “He is truly sorry for what he accepts was shameful conduct.” He said Bowes-Lyon had since been to counselling to try and understand his behaviour.

He is the eldest son of Michael ‘Mikey’ Bowes-Lyon, 18th Earl of Strathmore and Kinghorn, and Isobel Weatherall. His parents divorced in 2004, and he succeeded his father in 2016.

In June 2020, Durham Police contacted the Earl for violating the COVID-19 related travel restrictions then in place. A report said he travelled 200 miles to Holwick Lodge, Middleton-in-Teesdale, and was spotted by his butler buying newspapers.

In 2010 he was banned from the road for nine months after he was clocked riding his motorbike at 100 mph on a 60 mph stretch of road.

He was a one-time Conservative whip in the House of Lords, but developed an alcohol problem and was discovered in a Darlington massage parlour near his English stately home.

Glamis Castle has been the seat of the Bowes Lyon family since 1372. The most famous recent member is Lady Elizabeth Bowes Lyon, better known as the Queen Mother.

The mother of the current British monarch grew up in Glamis and bore her second child, Princess Margaret, on the 16,500-acre estate. More than 100,000 visitors tour the 130-room castle every year.

Outside court, Bowes-Lyon said: “I am greatly ashamed of my actions which have caused such distress to a guest in my home. Clearly I had drunk to excess on the night of the incident.

“As someone who is only too well aware of the damage that alcohol can cause, I should have known better. I recognise, in any event, that alcohol is no excuse for my behaviour.

“I did not think I was capable of behaving the way I did but have had to face up to it and take responsibility. My apologies go, above all, to the woman concerned, but I would also like to apologise to family, friends and colleagues for the distress I have caused them.