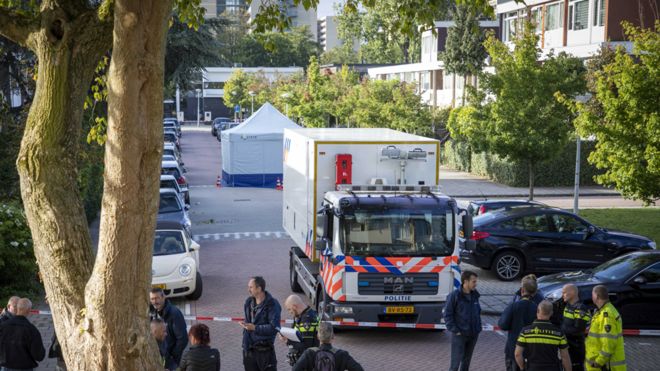 There is widespread mourning over the murder of a  lawyer  involved in a gangland case  on an Amsterdam street. Derk Wiersum, 44,  who had been acting for a prosecution witness in a gangster murder trial, was gunned down in Amsterdam whilst standing next to his wife.

Friends and associates of mr. Wiersum say his murder is heart breaking and shows the depth of depravity in the gang world . Family friend, Mark Braithwaite told The eye of media.Com: ”Wiersum was a committed lawyer and family man who strongly believed in the rule of law and its application. It is deeply distressing that his life was taken for doing his job.”

The CCBE  expressed its shock over the murder of Dutch defence lawyer Derk Wiersum. The lawyer was representing a state witness in a huge gangland case and was shot dead in broad daylight in Amsterdam yesterday morning. Duitch police are hunting a hoodie who fled the scene on foot. Locals in Amsterdam told researchers from this publication that the  ”criminal world in Amsterdam is not to be messed about with”. They have no morals, no boundaries. A lawyer can do their job, but must not get to confrontational with a gangster  accused of crime”, they said.

Dutch gangs are major exporters of cocaine, cannabis and a smaller exporter of heroin. In the drugs world, they work closely with Colombian cartels for the importation and exportation of ecstasy and cocaine. Prime Minister Mark Rutte  described the killing was “incredibly disturbing”. The killing raises fresh fears that the Netherlands is turning into a “narco-state”.

Wiersum was the lawyer for a state witness named Nabil B in a big case against two Moroccan-born men dubbed the most wanted criminals in the Netherlands. His killing has shocked Amsterdam, in particular the neighbourhood where the lawyer lived.
“This is very alarming news. The police and the public prosecutor are investigating,” the Prime Minister Mark Rutte said. International arrest warrants for murder and drug trafficking have been issued on the two suspects, Ridouan Taghi and Said Razzouki.

The killing comes a year after Nabil B’s own brother was shot dead, highlighting the failure in providing the lawyer with better security.

“This is a confirmation that we live in a narco-state”, says Jan Struijs of the NPB police union saidis an attack on the rule of law.”

“The murder of lawyers while exercising their professional duties is an unacceptable attack on the legal profession which role is essential to guarantee access to justice and protection of human rights and fundamental freedoms for all citizens – particularly through the protection of the rights of the defence and the guarantees of a fair trial,” the CCBE said in a statement.
“Attacks against lawyers are attacks against the rule of law,” it said.
The CCBE has said that it will continue to fight for the right of all lawyers to perform their professional duties without fear of reprisal, hindrance, intimidation or harassment, in order to preserve the independence and integrity of the administration of justice and the rule of law.
The CCBE represents the Bars and Law Societies of 45 countries, and through them over one million European lawyers.