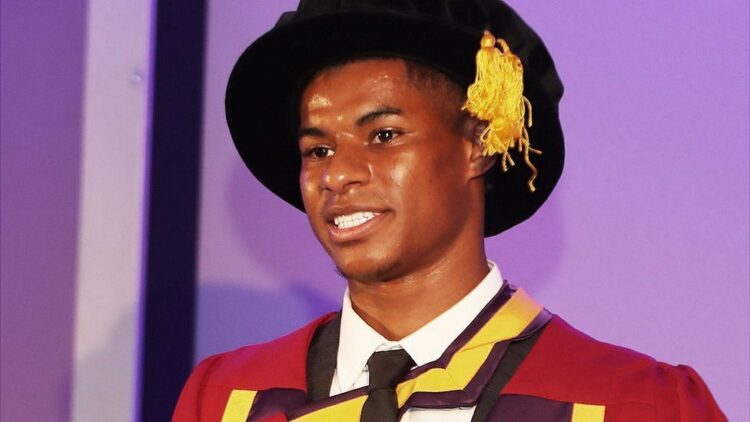 Marcus Rashford, 23, became the youngest recipient of an honorary doctorate from the university on Thursday.

The award comes a day after an England fan was convicted for posting racist material against Rashford and two other black playeers, after they missed their respective penalties in a penalty shoot out decider against Italy in the Euro 2020 finals.

Reacting to the  honorary doctorate award, the Manchester  United striker said it felt “bittersweet” to receive an honorary degree for fighting child poverty the day after the Universal Credit uplift was retracted.

The England ace told how the Government’s cuts meant “millions of families across the UK lost a lifeline” in a speech at the University of Manchester ceremony at Old Trafford.

The Manchester United forward was recognised for his campaigns  against child poverty – including forcing Prime Minister Boris Johnson to make a U-turn on free school meals.

Last month an announcement was made about plans to include Rashford’s use of social media in the G.C.S.E curriculum, starting from 2022.

Accepting the award from the University of Manchester, he said removing the temporary increase “could see child poverty rise to one-in-three children”.

Rashford has called for an end to what he said was a “child hunger pandemic”.

No 10 said the top-up was designed to help in the pandemic’s toughest times.