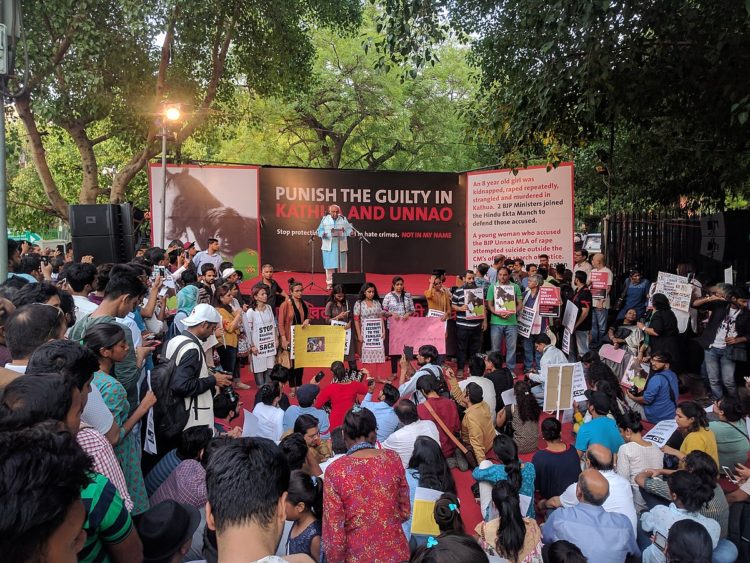 The victim, who belonged to a Muslim nomadic tribe, was found in a forest near Kathua city in January 2018. The case sparked a lot of protests across India, and attracted international news coverage about the scale of child abuses in India, where mutilations and murders have persisted to epidemic proportions . Such gruesome crimes defines India’s wide levels of superstitious beliefs, in many cases, stripping its people of any moral code.

The eight-year-old girl had gone missing in the new year of 2018,  her terribly assaulted body  discovered almost three weeks later.  Investigators said the child was locked up in a local temple for several days and given sedatives that kept her unconscious. The girl was drugged and held captive in the temple, sexually assaulted for a week, then strangled and battered to death with a stone in January 2018.

The abduction and horrifying killing of the child was part of a wider plan to remove the minority nomadic community from the area,  according to the 15-page charge sheet . Among those implicated in the crime was a Hindu priest and police officers.

The net was thrown wide to catch all guilty parties to the awful crime. Eight people, including a former government official, four policemen and a minor, were charged in connection with the crime. The crime created so much uproar, prompting India to pass a new law which introduced death penalty for anyone convicted of raping a child under 12. However, all the guilty parties escaped the death penalty in this difficult case.

Non profit organisation, Equality Now  have been advocating for the rights of women and girls globally for years. They have observed an 82% spike in reported rapes of children between 2015 and 2016 in India, with over 133,000 rape cases were pending trial in the same year.

The victim, who cannot be named for legal reasons, belonged to the Bakarwal community- a nomadic pastoral tribe, who are primarily Sunni Muslims. She had gone out looking for her horses in Jammu and Kashmir, a state in North India, in January 2018 when she was lured  and kidnapped by men who had a premeditated plan to arrange for her murder.