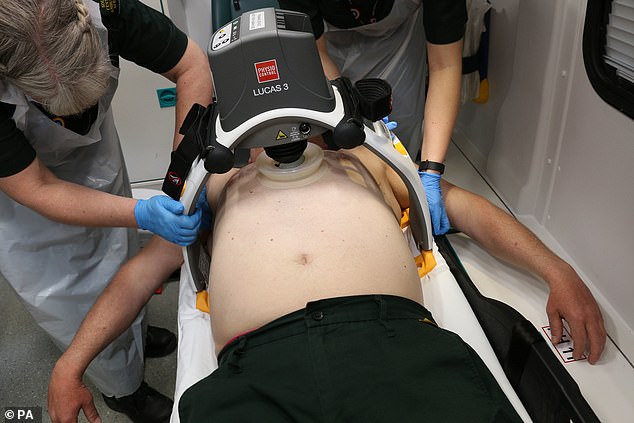 A“robot paramedic” is being used for the first time to carry out chest compressions on patients in ambulances to free up the emergency team to carry out other vital treatments.

South Central Ambulance Service (SCAS) is the first in the UK to take the new state-of-the-art technology, known as LUCAS 3, onboard its vehicles.

The device is a mechanical system which can deliver high-quality cardiopulmonary resuscitation (CPR) chest compressions consistently from the moment crews arrive on scene and throughout a patient’s journey to hospital without interruption.

The invention is a sign of the growing technological innovations of the 21st century.

It aims to free up the emergency team to carry out other vital treatments (SCAS/PA)
CPR is essential to maintaining blood and oxygen flow around the body while a person is unconscious and not breathing.

Greater advancements of the future may potentially  minimise the need for real doctors on the scene.

An SCAS spokesman said: “Once paramedics arrive and begin CPR or take over from bystanders who may have initiated it, the transition from manual compressions to LUCAS can be completed within seven seconds, ensuring continuity of compressions.”

The system uses wireless Bluetooth connectivity, allowing it to configure the compression rate, depth and alerts specific to an organisation’s resuscitation guidelines.

It also means it can collect data which can be reviewed post-event and shared with other clinicians.

Dr John Black, medical director at SCAS, said: “We know that delivering high quality and uninterrupted chest compressions in cardiac arrest is one of the major determinants of survival to hospital discharge but it can be very challenging for a number of reasons.

“People can become fatigued when performing CPR manually which then affects the rate and quality of compressions, and patients may need to be moved from difficult locations, such as down a narrow flight of stairs, or remote places which impedes the process.A ‘robot paramedic’ carries out chest compressions on a patient in an ambulance (SCAS/PA)
“There are also significant safety risks to ambulance personnel being unrestrained and performing CPR in the back of vehicles travelling at high speed.

“These devices don’t fatigue or change the delivery in any way, meaning high quality CPR can be delivered for as long as is required while freeing up the paramedic, keeping them seated and belted and able to focus on other critical aspects of patient care on a journey.

“It ultimately acts as a robotic third crew member for our teams.”.

Professor Charles Deakin, divisional medical director for SCAS and lead for resuscitation, added: “The LUCAS device transforms the management at a cardiac arrest and allows paramedics to focus on the key aspects of clinical care.

“It will be an invaluable part of the team and contribute to the already outstanding results that SCAS have achieved in saving lives of these patients.”

South Central Ambulance Charity has funded 28 of the devices to support crews across Oxfordshire, Berkshire, Buckinghamshire and Hampshire.