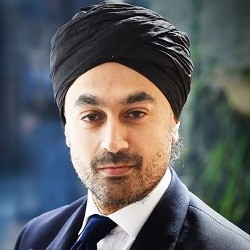 A circuit judge has been criticised by a High Court judge  for giving the impression of bias in a case where he  should have recused himself .

Mr Justice Pushpinder Saini(pictured) allowed appeals against an order of His Honour Judge Allan Gore and ruled that the judge be recused in relation to a second order. Allan Peter Gore QC, 68, known as Judge Gore QC was called to the Bar in 1978 and took Silk in 2003. Gore QC, a former president of the Association of personal injury lawyers , has come under fire for his misjudgement in an important case.

Judge Allan Gore was criticised for using  “intemperate language” when he told  a barrister that he expected to see “the organ grinder” appear at the next hearing of a case.

The Orders made by the Judge in two related claims(In Dorman & Ors v Clinton Devon Farms Partners) arose out of a fatal accident at a farm in Devon on 19 May 2014.  The First Appeal is against  procedural unless orders, indemnity costs orders, and directions for attendance before the Judge of the  Appellant’s firm senior case handler .These were case management orders which the Judge, as he was entitled to do, made of his own motion.

The Second Appeal was against  the Judge’s refusal to  withdraw(recuse) himself  from the case  on  claims on grounds of apparent bias. The  application for the judge to withdraw himself from the case was based on the Appellant’s concerns about the Judge’s decisions and conduct in the proceedings leading to the orders challenged in the First Appeal.

The case examined whether the circuit judge had gone beyond ‘robust’ case management to give the impression he was biased (actual bias was not alleged). The court heard HHJ Gore used language which showed he was ‘angered’ by delays in proceedings and had concluded he needed to ‘kick’ the defendant into action through sanctions and penal costs orders.

The  case in relation to  a fatal accident at a farm in Devon in 2014, led to separate claims brought by the deceased’s family and his co-worker who witness the aftermath. The incident occurred in May 2014, there was an accident on the Appellant’s farm estate (Clinton Devon Farm) near Sidmouth in Devon. An employee, Kevin Dorman, was driving a tractor pulling a 4-wheel trailer loaded with silage. As mr Dorman descended the slope of a field, the tractor and trailer went off at a bank on the edge of the field and crashed into the lane below.

He died as a result in a tragic accident  witnessed by a fellow employee, Andrew Turton, who went to the aid of Kevin Dorman.

The claims  came before the judge for directions in May 2019 due to the claimants waiting to issue and separate criminal proceedings arising from the accident. The judge, HHJ Gore seemed to hold the defendant responsible for the delay and made unless orders for services of defences, an order for indemnity costs and an order that the defendant’s senior case handler appear at the next hearing.

The case did not come before  the courts until five years later  due to the need to delay the proceedings by way of stay because of criminal proceedings arising out of the accident. Criminal proceedings  for gross negligence manslaughter and health and safety offences were brought by the Health and Safety Executive and CPS against the Appellant and a further individual. The Crown Court trial concluded on 11 February 2019 with an acquittal on all charges, apart from one count where  the jury failed to reach a verdict.

Sitting High Court judge, Saint J, decided to overrule the judge in question, making reference to a Supreme Court ruling that permits interference in a a case management decision by a judge seen to have acted out of the ”generous ambit of the discretion entrusted to him”.

He said the Judge was ” motivated in his concerns by his belief that the delay in the proceedings being progressed was to be laid at the door of the Appellant”. These concerns were deemed ”an error of fact”.

”The language used by him demonstrates that he was angered by this and that this anger seems to have moved him to make each of the orders to which the Appellant objects. My reading of the transcript is that the Judge concluded that robust case management (supported by sanctions and penal costs orders) was needed to “kick” the Appellant into action and that the Appellant was effectively dragging its heels in not throwing in the towel on liability”

FAILURE
Saint J criticised HHJ Gore for failing to attach weight to the fact that for 3 years there were no proceedings and for the remaining period there was no Particulars of Claim in one action, and a stay on proceedings in both actions. Saint J added: It was, in my judgement, no basis for the comment about 5 years being spent contemplating D’s ‘liability navel’ and no basis for the threat about future liability costs.

He further added that the disparity between the judge’s outrage at the defendant and apparent sympathy with the claimant was ‘striking’.

Saini J added: ‘In my view, the judge commented unjustifiably and used intemperate language in relation to the appellant’s conduct to date; and he made what seem to me to be inappropriate comments which I can only describe as “threats” about his approach to future costs and case management, thereby giving rise to the appearance of bias.