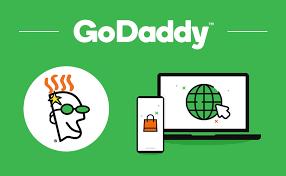 Giant webmaster, Godaddy and their experienced team of ‘experts’ exhibited a disappointing level of incompetence on Monday when they caused The Eye Of Media.Com’s site to be disorientated and ineffective for the whole of Monday due to a blunder on their part.

Unlike most organisations that collect payment for services after work is completed, Godaddy adopt the safe practise of insisting of payment before any work is done. On Monday, they were paid £49 to exercise a maintenance function on our site which was experiencing no problems, only for severe problems to manifest after they were paid. The main theme of the site disappeared alongside all our links , hot news, and most popular section whilst they were working on our site.

Shocked by the disorientation of our site, a call to godaddy revealed an inexcusable error of communication between staff who took the job and the special premium team hired to implement it to perfection. We were told they team had been misinformed that we wanted pictures optimised. Precisely what kind of optimisation they thought we requested was never clarified, nor was any explanation how such a task of optimisation led to a distortion of the entire site without their notice.

Apologetically, the typically courteous hosting team assured us of an immediate rectification of the problem, including a reimbursement of our fee as a gesture. Most surprisingly, after  eventually refunding the fee, a separate funding the  the premium team in a separate mail said they had to  problem was eventually fixed but at the expense of all four articles already posted on Monday. ”The team backdated your articles to the 20th”, we were told, despite the fact we had articles on the 23rd already posted. After clarifying the importance of including current articles in the backdate, the matter grew worse as the current articles were eventually posted in a disjointed format without the structured theme and all the associated links.

Modification of the abysmal error led to a reversion to the old articles, but again without our usual links. The disgraceful blunder left us looking silly for a whole day. When eventually the problem was fixed, we were missing the articles of the 23rd, meaning we had to forfeit a majority of them, using just one or two which were manageable.
Worse of all, after all the failings, the moderate fee of £49 was not reimbursed to us despite the promise, and the matter being raised to Godaddy.

The entire experience was shameful and regrettable. It does not bode well for a giant company like Godaddy, owned by a billionaire. It is not the first time such a blunder has occurred. Earlier this year, Godaddy staff accidentally deleted the entire contents of our site after a staff member pressed the wrong plug in. They attempted to get us to pay for the same premium service to fix the problem, but it was not until further investigation on a separate occasion the same day, did it emerge from another experienced technician that an error had been made. The site was eventually restored, and apology given.

During a media discussion with the Uk’s Guardian editorial where this matter was raised, a representative  said:

”its a shame these type of incompetent service occurs with such an established organisation like Godaddy. Negative reviews of a similar kind have been spotted on google, and it is high time Godaddy maintain a consistent standard”

Higher standards are expected of a company of such high reputation. If an organisation of such global financial might can exhibit shortcomings to such a degree, it begs the question what other failings exist undetected. The majority of the services we have received from Godaddy in the last five years have been satisfactory, but the few failings have been  few too many. We implore Godaddy to maintain the highest standards of operation devoid of this kind of pitfall.

A spokesperson from Godaddy told The Eye Of Media.Com: ”We are sorry for the negative experience you have had and have escalated it high up to our top supervisors. We will look into your case further and a supervisor will get back to you within 72 hours”. That was 24 hours ago, so we expect to hear from them again within the next 48 hours.