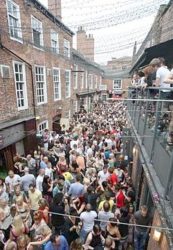 Gay men are being refused entry at some Leeds Clubs, the eye of media.com can reveal.

Doormen are said to have refused a group of gay men entry from a club we can’t name because of a legal threat that the suggestion of this article is that it was because of their sexual orientation.

One of the aggrieved gay men told the eye of media.com ” they refused is purely because we were gay , it was very obvious. I don’t see why they are fxxxxxx denying it now. One of them even said there are plenty of gay clubs around here , why do you want to party here?I have a good.mind to sue their ass darling , these guys are fxxxxxx homophobic!

A doorman at the club told the eye of media.com that they have a policy that requires men to turn up to their clubs with women, not on their own or with a group of other men. ” When there are too many men in a club and they largely outnumber he went, it creates a situation in which the women are prone to being harassed by the men the doorman, who refused to give his name said.

This means it is illegal to prevent someone from entering a club open to the public on he grounds they are male.

Many doormen in Leeds and other parts of the country apply the principle of stopping men without women entering their clubs, but that’s because they are ignorant of the law, or hide behind the flawed grounds that they have complete discretion on who they let into their clubs.

. The issue of a club or bar wanting to balance out the distribution of men or women in their club makes sense, but club bosses will need to find another way round this matter.

The eye of media.com recently began a campaign against the unlawful abuse of power in the security industry and have sent letters and emails to about ten clubs to enlighten them about some of their longstanding illegal practices

A number of clubs and bars in Leeds, London and Birmingham have since acknowledged the inherently wrong policy and reversed their previous stance on this. Another dooan from a different club in Leeds told he eye of media.com on Tuesday

“They should stay in gay clubs. Straight guys don’t want to be hit on by gay men, and that’s what they have done when allowed into straight clubs. They stare straight men right in the eyes to check whether there is an attraction, then eventually start getting off with other gay men right in front of the straight men.

” We have sometimes seen gay men who are bisexual start hitting on with a woman then another gay man comes and snatches the man of her. It causes too much problem, some doormen feel they are best clubbing separately “.

The doorman again refused to give his name or be photographed , insisting only that we use his quotes.