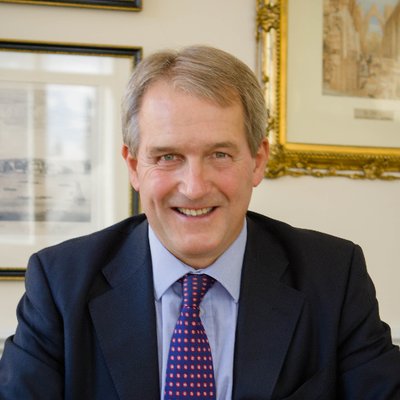 Owen Paterson, the former MP at the centre of a lobbying scandal that involved Boris Johnson’s government, is taking the UK to the European court of human rights to challenge the finding that he repeatedly broke the rules on paid advocacy.

In a typical hypocritical fashion, he is today using the European Courts to make his case.

He filed his case on the grounds that his right to respect for private life was infringed under article 8 of the European convention on human rights.

His case has been brought against the UK government, after the parliamentary commissioner for standards found Paterson had breached the MPs code of conduct by misusing resources, engaging in paid lobbying and failing to disclose interests.

The Commissioner also found that he had failed to demonstrate the selflessness and integrity which formed part of the principles of public life.

The Parliamentary Commissioner for Standards Kathryn Stone last year found the then-Conservative MP for North Shropshire breached the Commons code of conduct by lobbying ministers and officials for two companies paying him more than £100,000 per year.

The Commons Standards Committee said his actions were an “egregious” breach of the rules on paid advocacy by MPs and recommended that he should be suspended for 30 sitting days.

After the report, MPs on the standards committee recommended a 30-day suspension, which Johnson’s government initially objected to, and planned to change the rules around standards investigations.

However, the prime minister eventually stayed out of the situation, and Paterson’s suspension was approved by the House of Commons in a decision.

Paterson subsequently resigned from office in November 2021, describing the experience as an “indescribable nightmare” for his family. The former MP has previously blamed the standards investigation process for being a contributory factor in the suicide of his wife of 40 years, Rose.

Patterson cites the infringement of his rights under article 8, as the “public finding that he had breached the code of conduct damaged his good reputation, and that the process by which the allegations against him were investigated and considered was not fair in many basic respects”.

Paterson was also provisionally found to have broken transparency rules by failing to register as a lobbyist for the healthcare firm, with the registrar giving a notice of intention to issue a civil penalty.

However, in a recent update, the registrar of consultant lobbyists published a decision notice saying Paterson did not in fact break the rules because he fell beneath the threshold for registering to pay VAT. In a technicality of the legislation, only lobbyists who are VAT registered are compelled to declare their clients and lobbying activity.

The investigation found: “It is likely that the three communications would otherwise have been registrable [as consultant lobbying] if payment had been made to a VAT registered entity. However, as payment was not made to a VAT registered entity they were not registrable and Mr Paterson was not, at that time, undertaking consultant lobbying activity for the purposes of the act.”

No 10 said it was aware of Paterson’s case but had no comment. Paterson was also approached for comment.

The prime minister’s official spokesperson said: “I’m aware of the legal action that relates to the ECHR. Given it is legal action I can’t comment at this stage but we will respond in the normal way.”