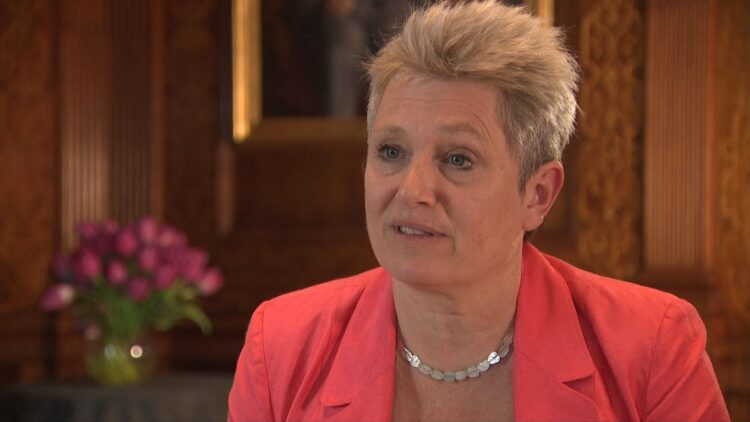 The former head of the vaccines taskforce has criticised the current COVID jabs as being inadequate, saying that they are “not good enough”.

Dame Kate Bingham,(pictured) who spearheaded the UK’s vaccination programme in 2020 said the Uk government was regressive in its preparation for future pandemics.

Ms Bingham, the managing partner at the life sciences venture capital firm SV Health Investors, headed the UK’s vaccine taskforce between May and December 2020. The taskforce played a key role in securing the country’s backing of, and access to, a wide portfolio of potential Covid jabs – a move that has been credited with putting the UK on the front foot for early deployment of vaccines during the pandemic.

Speaking to the Commons health and social care committee about lessons learned during the pandemic, Bingham said many of the initiatives set up by the taskforce had been dismantled, while key recommendations it had provided had not been acted upon.

She told a committee of MPs. “I don’t think we are in a much better place to deal with a new pandemic, I think we’re marginally better,” she said on Wednesday.

Dame Kate, 58, said that Britain had “lost its leadership” in girding for a Covid-style crisis, which was in complete contrast to the approach by the European Union, which is investing £5.2 billion ($6.21 billion) for pandemic preparation over the next five years.

“What’s gone wrong is that there’s been no expert or leader that’s been put in place to co-ordinate the activities,” she told parliament’s health committee. “We’ve got the capability in this country, but it can’t be done in a vacuum. We need to have an expert leader to try and get us back into a better position.”

At the height of the pandemic in 2020, Dame Kate was appointed as the head of the UK’s Vaccine Taskforce and received international praise by making Britain the first major country to vaccinate its population.

Having secured 350 million doses for the UK’s 68 million people she left her post in December 2020, giving the government an outline plan to help fight Covid and any future viral pandemic.

“We gave some very specific recommendations as to what we thought ought to happen, that would define the UK as a global leader from vaccine development to manufacturing, but that’s not happened,” she said.

Giving evidence to a parliamentary inquiry into lessons to be learned from the coronavirus pandemic, she said: “Our vaccines currently are not good enough.

“We need to improve the quality of the vaccines, the durability, the ability to stop transmission, the way in which we give vaccines.

“Lots of things need to be improved. Our approach seems to have been to go backwards rather than to continue the momentum.”

Dame Kate played a key role in ensuring Britain was the first country in the world to start vaccinating its citizens against coronavirus in December 2020.

She told MPs from the health and science committees that the UK has now gone “backwards”.
“What’s gone wrong is there’s been no expert or leader that’s put in place to coordinate the activities,” she said.

“Everything from vaccine innovation and scale up to landscaping – figuring out where the new variants may come from, the new potential pandemic viruses – people that understand manufacturing, scaling up clinical development, regulation.

“All of those have gone. Maybe there is somebody secret out there that’s doing that, but not as far as I can see.”

Dame Kate said she was “baffled” by the government’s decision-making regarding the development of new vaccines.

“To begin with I thought it was a lack of experience of officials since we don’t have a lot of people within Whitehall that understand vaccines, relationships with industry, all of that,” she said.

“But actually, I’m beginning to think this is deliberate government policy – just not to invest and just not to support the sector.

“I cannot explain why we haven’t appointed somebody who can actually bring all this together because we’ve got the capabilities and yet, systematically, things are being dismantled that we put in place.”

The government is currently in negotiations with US pharmaceutical company Moderna to supply vaccines for a new variant, but a final contract has still not been signed, despite an initial agreement being reached in June.

Asked about why negotiations might be taking so long, Dame Kate said: “Goodness knows. It does not take six months to go from a head of terms to a binding contract.”

Earlier, the panel of MPs was also given a damning assessment about the UK’s preparedness for future pandemics from leading Oxford scientist Sir John Bell.

The University of Oxford Regius Professor of Medicine said: “A novel new pandemic that might occur any time in the next ten years.

“What worries me is we’re being distracted, for very good reasons – cost of living, energy, war in Ukraine – and people have kind of forgotten about the pandemic.

“But the reality is another pandemic could be much worse than the last one we had, so we do need to keep attuned to that.”

“The boosters are not really providing any prolonged protection against transmission.

“You could have one now and by mid-January you’d be getting very little protection against transmissions whereas, interestingly, natural infection is much more effective.

“The effect of natural infection in terms of preventing reinfection with Covid lasts about 180 days which is a material amount.

“So I think we do need to think quite hard about our vaccination strategy with boosters now.”

Bingham said there was a lack of an expert leader to coordinate activities ranging from vaccine innovation and scale up to the understanding of new variants and potential pandemic viruses. “All of that has gone,” she said. “Maybe there’s somebody secret out there that that is doing that, but not as far as I can see.”