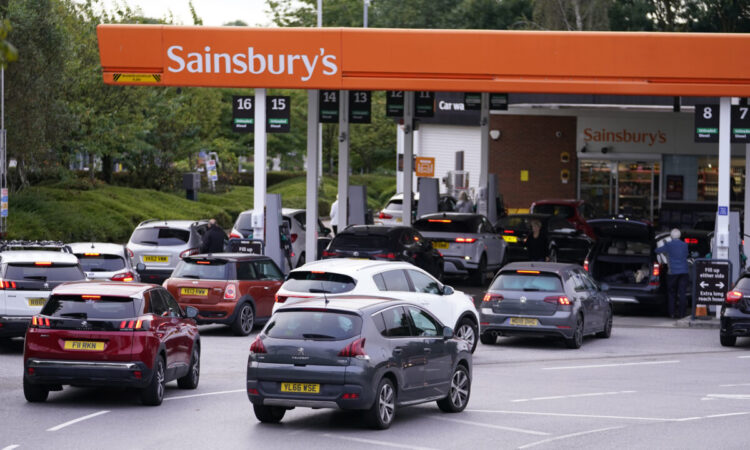 Panic buying at petrol stations across the UK will lead to key workers going without petrol, the chairman of the Petrol Retailers Association has warned.

Brian Madderson told Sky News the crisis is “going to get worse before it gets better” and suggested it could affect the emergency services and other “really serious jobs”.

Long queues continued to form at forecourts across the UK on Saturday morning despite pleas from ministers and police, who urged motorists to be “sensible” to prevent exacerbate the situation.

Fuel is already being rationed, with EG Group setting a limit of £30 per customer at nearly 400 stations, while pumps at some BP, Esso, Tesco and Shell sites were closed.

Yesterday, it was suggested that the military could be deployed to tackle the UK’s growing fuel crisis if needed, a cabinet minister said on Friday.

The crisis was sparked by the shortage of HGV drivers and the government is now considering lifting its visa restrictions to attract 5,000 foreign workers in to the country. However government insiders have told The Independent it might already be too late to stop disruption to the Christmas holiday.

Motorists across the country have been rushing petrol stations to stock up in the wake of concerns of a rapidly growing shortage of fuel.

Oil giant BP confirmed Friday that it had temporarily closed a handful of its U.K. gas stations due to shortages of unleaded gasoline and diesel.

“These have been caused by some delays in the supply chain which has been impacted by the industry-wide driver shortages across the U.K., and there are many actions being taken to address the issue,” a spokesperson said via email.

“We continue to work with our haulier supplier to minimize any future disruption and to ensure efficient and effective deliveries to serve our customers. We are prioritising deliveries to motorway service areas, major trunk roads and sites with largest demand.