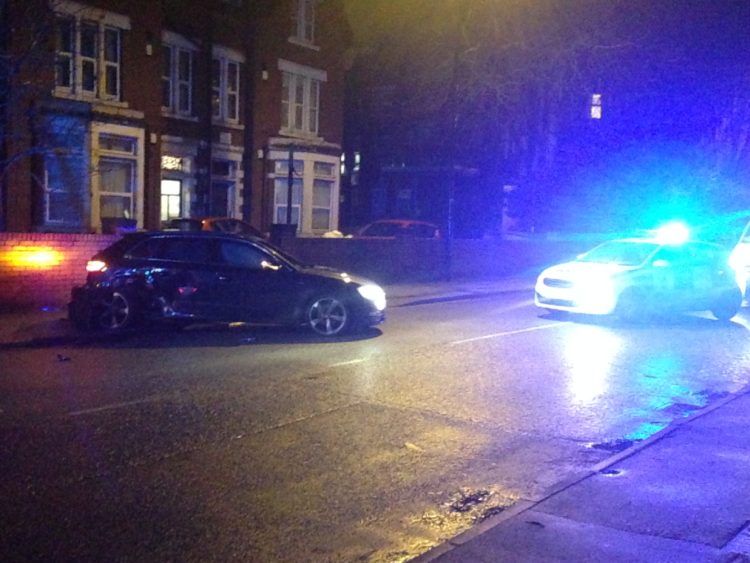 A drunk driver crashed into another car and injured the driver when he raced across a road in Headingley, Leeds.

The car was written off and the Asian victim was rushed to hospital last Sunday.
The picture sent by Leeds University student, Lucy Wright, shows the damaged vehicles attended by police and an ambulance crew.

19 years old Wright told the eye of media.com ”this is a horrible accident, a lot of damage seems to have been caused. I just missed the full impact of the crash, but the scenery speaks for itself. The victim must have been really hurt. It just shows how dangerous it is to drink and drive”.
Police cordoned the stretch of Carnegie Road in Leeds leading up to the Headingley stadium where where Leeds United and other teams meet to play, and where rugby tournaments take place. An ambulance with medical professionals attended to another victim who was in pain as a result of the accident. Family members of the hospitalized  victim rushed to the scene to examine the damage on the car, after which they would head for the hospital to see how the victim is doing.

Residents nearby gathered to witness the scene of the accident. Another victim treated in the ambulance was in pain.  The crash is a reminder of the dangers of  driving in the face of reckless and negligent people on the streets. Frighteningly, many drivers drive high on cocaine or over the limit on alcohol. This has dangerous consequence for motorists who may innocently run into one of these reckless individuals.
Responsible motorists do not drink whilst driving, but there are always some people too stupid to care about the safety of ordinary motorists and passer byes. Every citizen of the Uk and every part of the world has a duty to always reprimand anyone they see driving under the influence of any toxic substance. Individuals are often blazee about the recklessness of irresponsible friends who do not consider the safety of members of the public.
Leeds is a very sociable city where prices are reasonable and the cost of living is not very high. Buzzing with students enjoying student life amid a population of high earning professionals on the one hand, and criminals on the other hand, Leeds is a vibrant city with a hot social life.
Leeds is one of the most tolerant cities in the country, and boasts a number of cool venues for people to take their pick of food and drink. It’s splendid and generally ambient atmosphere often means there will be one or two people who will go behind the wheel despite knowing they should be in the passenger seat or in a cab. The eye of media.com contacted Leeds police for an update of the incident in terms of criminal charges, but was not given an official feedback. A policewoman said the investigation was fluid, but that somebody would get back to us to update us.
Spread the news
1
1
Share