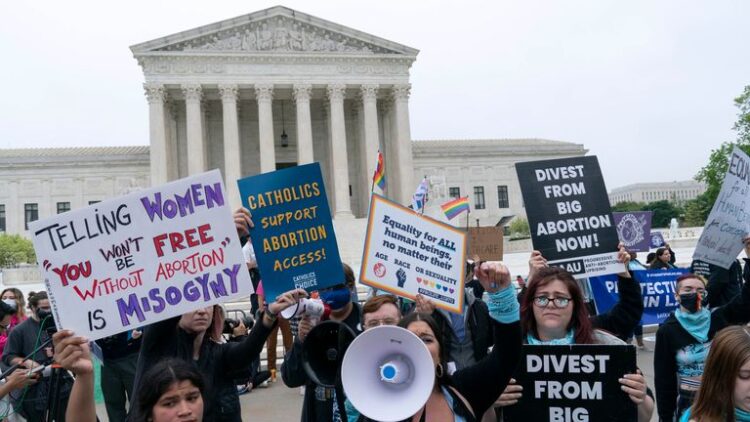 The constitutional right to abortion has legally been denied to countless women in America, after the Supreme Court overturned its 50-year-old Roe v Wade decision, and opened the door for individual states to ban the procedure.

The Supreme Court judges showed limited intellect in their reasoning, by shockingly failing to defend their own ruling except by branding the original ruling that afforded women the right to abortion as wrong.

The ruling  was dictatorial  and almost political in its delivery,  without any impressiveness in its legal thinking.  It appeared to have been framed to satisfy the biased views of the judges themselves than to deliver a fair rule for all Americans. Through this ruling, the integrity of the Supreme Court in itself is potentially  brought to question

After the Supreme Court ruling, abortion access is expected to be cut off for about 36 million women of reproductive age, according to research from Planned Parenthood, a healthcare organisation that provides abortions. Demonstrators from both sides had gathered outside the court, with police keeping them apart.
Justice Samuel Alito who delivered the opinion of the court.

Abortion presents a profound moral issue on which Americans hold sharply conflicting views,” he says in his opening statement.

He wrote that Roe and Planned Parenthood v. Casey, the 1992 decision that reaffirmed the right to abortion, were wrong the day they were decided, and must be overturned.

“We therefore hold that the Constitution does not confer a right to abortion. Roe and Casey must be overruled, and the authority to regulate abortion must be returned to the people and their elected representatives.” Disappointingly, he provided no explanation why the decisions were wrong.

One of those joining Alito was Justice Clarence Thomas.

He is regarded by some to be the most conservative member of the court, and first voted to overrule Roe 30 years ago.

In his separate opinion piece, he explicitly called on his colleagues to put the Supreme Court’s same-sex marriage, gay sex and even contraception cases on the table.

Justice Brett Kavanaugh appointed by Republican Donald Trump in 2018 voted to overturn Roe, but also gave no statement to rationalise his decision. He said the court’s decision does not outlaw abortion, and instead “leaves the question of abortion for the people and their elected representatives in the democratic process”

The landmark 1973 Roe v Wade case saw the Supreme Court rule by a vote of seven to two that a woman’s right to terminate her pregnancy was protected by the US constitution.

The ruling gave American women an absolute right to an abortion in the first three months (trimester) of pregnancy, but allowed for restrictions in the second trimester and for prohibitions in the third.

In its current session, the Supreme Court had been considering a case, Dobbs v Jackson Women’s Health Organization, that challenged Mississippi’s ban on abortion after 15 weeks.

By ruling in favour of the state, the conservative-majority court effectively ended the constitutional right to an abortion.

The three justices who disagreed with the majority – Stephen Breyer, Sonia Sotomayor and Elena Kagan – wrote that they had done so “with sorrow – for this court, but more, for the many millions of American women who have today lost a fundamental constitutional protection”.

It puts the court at odds with a majority of Americans who favoured preserving Roe, according to opinion polls, though some crowds also gathered outside the building on Friday to celebrate the decision.

US President Joe Biden said the Supreme Court has made a “tragic error” in overturning the landmark Roe v Wade decision that enshrined a women’s right to an abortion.

“The court has done something it has never done before: expressly taken away a constitutional right for millions of Americans.

“With Roe gone, the health and life of women in this nation is now at risk.”