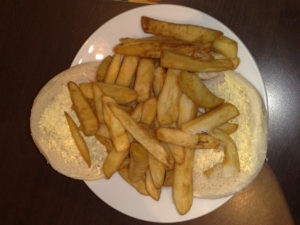 The food standard agency have today warned that burning starchy food such as chips can lead to cancer.

Burning starchy food such as spud and bread can lead to cancer according to the Food standard Agency. Fried food like chips can also trigger cancer, the agency claims.

The UK Sun newspaper ran the warning as the front page lead story today, highlighting the seriousness of the issue. The Sun, Uk’ s most widely read paper, is known for sending warnings on issues considered in the country’s best experience. And their decision to make this topic a headline story highlights the weight attached to the topic. A large section of the British public buys the paper because of its relatively  cheap cost and the papers tendency to appeal to a wide section of the working class who make up a big proportion of the population.

The traditional page three pictures of naked models have long been a major source of appeal to highly sexed male readers and countless teens too. The previously completely nude pics tires have since been modified by leaving some clothing on page three girls.

But the papers popularity has continued to grow among youngsters, giving the paper much leverage for influence.
The publication of the warning should be taking seriously because cancer has many causes besides smoking.

However, the warning was blasted by Tim Knox from the Think Tank Centre for policy studies. He said ” people don’t need to be warned how to use their toaster in the morning and their oven in the evening.  The vast amount of ridiculous public warnings means they are less likely to listen to a serious warning when it comes along. It’s dangerous”.

Mr. Knoxs attempt to counteract the warnings from health experts is wrong and irresponsible. There is enough evidence to show that fried food is very unhealthy for the system anyway. When new  health warnings are announced, critical should be slow to speak against it unless they are experts too with scientific grounds to invalidate the official warning given. There is every possibility the warning is genuine with a strong  factual basis.

The only reason such warning will be undermined without evidence is to protect the commercial interests of businesses and pamper the comfort of those who love chips. Truth must always be told no matter how uncomfortable it is to those who hear it.

Health experts  claim a toxic element called arcrylamide can be caused when sugars and starchy proteins are cooked together above 120c. The risk of such cooking leading to cancer includes baking frying, toasting and roasting. The warning should be taking seriously, with the highlighted foods cooked with great care.

Ideally, it is best to avoid chips completely and minimise  consumption of most fried foods. They are awful for the skin, body and mind. The only thing they satisfy is hunger and the bank balance of those who run businesses selling chips. Let those who continue to eat chips do so with full awareness of the health risks. Those who want to continue to cook grilled toasted or baked food should do so with the knowledge that it most probably can cause cancer. It’s more dangerous to hide truth from the public out of fear the truth may alarm people. The

The Sun must be commended for frequently championing health issues and concerns of obesity.