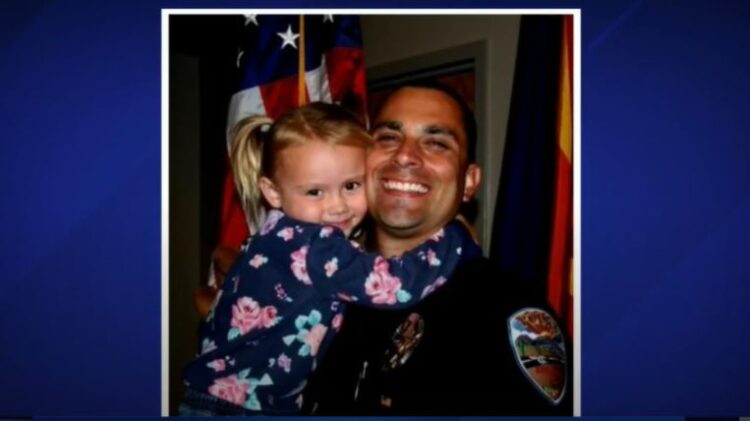 An Arizona Police Officer has adopted a 4-Year-Old Girl he helped rescue from an abusive family.

In March 2018, Zach was working as a patrol sergeant when he and his officers got a call to check Kaila’s residence.  He would meet a victim of abuse who would eventually be adopted by this cop with a big heart. He has set a high standard for other cops and citizens to follow.

Kaila had been abused by her caregivers, and ended up in hospital as a result of sustained injuries from the abuse. Her abusers were later filed with criminal charges.”  We coloured, we snacked . she held my hand and she was just this cute little thing,” Zach said. “Once detectives came, they picked her up and took her to the hospital, the warm hearted police officer told Good Morning America.

Zach, a father of two other children, went home after spending hours with Kaila and told his wife that he wanted the child to come and  live with them. His big heart is today being celebrated by lots of Americans who have heard his story.

Discussing their first meeting with Good Morning America (GMA), Brian said, ‘We coloured, we snacked […] she held my hand and she was just this cute little thing. Once detectives came, they picked her up and took her to the hospital.’

After meeting Kaila, Brian went home to Cierra, whom he shares two children with, and said he wanted Kaila to come live with them.

‘She came with a sippy cup, a bag of clothes that didn’t fit her, and that was it. Within the second day she was calling my wife ‘mom’ or ‘mommy’. I was ‘guy’ for a week or two, and then when she started preschool she learned who dad was.

He continued, ‘We lived each week not knowing if she was going to go back to her biological parents, or how long we were going to keep her. Our goal was to love and care for this little girl for as long as it happened.’