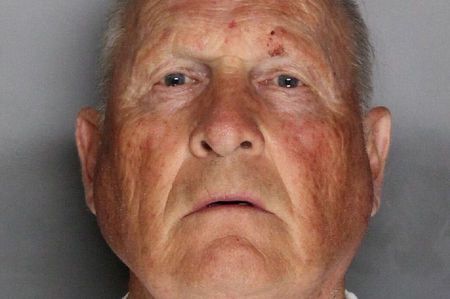 California authorities have arrested and charged a former copper with murder, after being suspected of being a serial killer in the 1970s and ’80s

Sacramento County officials told reporters that Joseph James DeAngelo has been charged with two counts of first-degree murder in the 1980 killings of a couple in Ventura County.

De Angelo is suspected of being a serial killer tied to dozens of slayings and sexual assaults in the 1970s and ’80s. He was arrested on Wednesday as he left his Sacremento home.

Authorities in Sacramento County also have arrested DeAngelo on suspicion of murder in the slayings of married couple Brian and Katie Maggiore in 1978. Known as the “East Area Rapist” , he is accused of at least 12 homicides, 45 rapes and dozens of burglaries across the state. Sacramento County District Attorney Anne Marie Schubert says DNA helped solve the case.

Officials said he was living in the Sacramento suburb of Citrus Heights when he was arrested on Tuesday.
“Joseph James DeAngelo has been called a lot of things by law enforcement … Today it’s our pleasure to call him defendant,” Orange County District Attorney, Tony Rackauckas gladly told reporters.
“Finally, after all these years, the haunting question of who committed these terrible crimes has been put to rest.”

DeAngelo also was an officer in Auburn, and in Exeter, in Southern California, between 1973 to 1976 “around the time of the Visalia Ransacker cases.”
Sacramento County District Attorney Anne Marie Schubert says DeAngelo’s name hadn’t been on authorities’ radar until last week in connection with the “East Area Rapist” case.

A family member of a couple who fell victim to the California serial killer decades ago said the arrest of a suspect has brought closure. Bruce Harrington lost his brother and sister-in-law to the serial killer in 1980 in Orange County. He welcomed the finding. He said it’s time for victims’ families to grieve and “bring closure to the anguish that we all suffered for the last 40 odd years.”

Harrington’s brother, 24-year-old Keith Harrington and his wife, 27-year-old Patrice Harrington, were killed in 1980 in their home.

DeAngelo has been charged with two counts of first-degree murder in the 1980 killings of a couple in Ventura County.

She said the “answer was always going to be in the DNA” and the connection came in the slayings of Brian and Katie Maggiore.

Authorities say a serial killer committed at least 12 homicides, 45 rapes and dozens of burglaries across the state. The attacker became known as the “East Area Rapist.”

California authorities say the arrest of a suspected California serial killer who’s accused of dozens of slayings and sexual assaults in the 1970s and ’80s comes after tireless work.

FBI and California officials in 2016 renewed their search for the suspect dubbed the East Area Rapist and announced a $50,000 reward for his arrest and conviction. The serial criminal was known for creeping into his victims’ houses while couples slept, shining a flashlight in their eyes before raping the woman while the man was tied up.

Between 1976 and 1978, De Angelos committed several burglaries, rapes and killings in the Sacramento area, before varying his attacks in the East Bay, then moving on to Ventura and Orange counties in Southern California, according to the FBI. He has finally been caught in old age, his shame will haunt him to his grave.