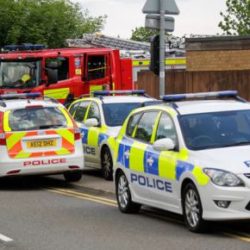 In a series of swoops in the London, the police have been successful in preventing a number of terrorist incidences. A woman, in her 20s was shot in Willesden in one of a number of police operations, in which terrorist operations were being planned. She was hospitalised by the gun wounds, but is in a stable condition. This was apart from 6 people who were arrested in a raid in Kent.
The arrests come a day after police officers apprehended a man near Parliament yesterday, Thursday, after catching him with a ruck sack full of knives. Police sprayed C.S gas as they entered the property, and arrested a 16-year-old boy, a man and woman, who were both 20 years of age. A 43-year-old woman was arrested in Kent.
Outside Scotland yard, Deputy assistant commissioner Neil Basu told reporters :
“Due to these arrests that have been made yesterday, in both cases I believe that we have contained
“There are constant acts of immense bravery by officers, armed and unarmed – those that the public see, where our officers run towards danger just as you saw yesterday, but a huge amount of unseen work that the public will never see behind the scenes.”

The Met said the suspects were arrested on suspicion of the commission, preparation and instigation of terrorist acts. Terrorism has become a big problem for in modern times, its perpetrators seeking to cause havoc at every opportunity. The injuries and killings that occurred last month is not enough satisfaction for them, instead they seek to cause more loss of life. Witnesses reported seeing men in gas masks with guns, as police descended upon the address to execute their operation.

The man caught in London was caught following a tip off from his family. He must have been expressing his plans to commit an attack. In the most fitting title covered by the tabloids today, the Daily Express said ‘’smirk of a jerk’’. Very fitting, because that’s what it is. Why would someone smirk after being caught with knives in preparation of a terrorist act? A man who was prepared to kill finds it funny that the whole world knows what he is about, and that his evil plans were aborted before they were carried out. Is history will soon be an open show before he is dealt with by the justice system for his criminal offence and extremist plans.

The British police and security service deserve praise for their good and efficient work in catching these dangerous men and stopping them before they cause serious harm and put the nation in another state of mourning. After losing their colleague in that brutal killing outside Parliament last month, the police must be in aggressive mode against terrorist acts across the U.K. The behind the scenes work they have done is more reason to appreciate and hail their good work.