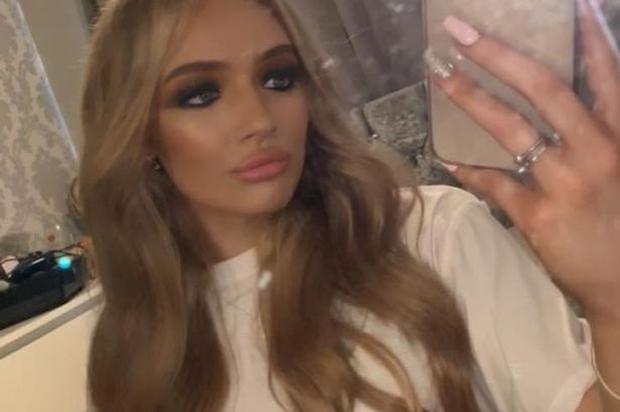 Awareness is being raised on social media about the dangers dishonest women can sometimes pose  to men after an evil ex-girlfriend sent herself threats from fake Instagram accounts to get an innocent man locked up.

Courtney Ireland-Ainsworth  was jailed last week for creating up to 30 false profiles, then lied to police that her former partner Louis Jolly was behind “vile” messages.

The deceptive teenager  reported him for supposedly threatening to stab her after sending a fake warning via her made up instagram page, warning: “She is getting a f***ing blade in her chest.”

Ainsworth made 10 police statements claiming Mr Jolly was harassing and stalking her, leading to him being arrested six times and spending 81 hours in custody, including being remanded overnight.

He was charged with assault and stalking, hit with a stalking protection order, bailed on a home curfew with an electronic tag, and even lost his job.

When recorder Ian Harris sentenced her last week, he  lambasted her for creating an entirely fictional but superficially credible web of poisonous deceit for over five months.”

Her then boyfriend, Mr Jolly, 22, said they were together for two years but split up on “okay terms” in October 2019, before Ireland-Ainsworth started seeing a new boyfriend, a man called Declan Rice.

Paul Blasbery, prosecuting, said she made numerous calls to police from July 15 to December 13, 2020, and provided screenshots of messages and the names of Instagram accounts, which she attributed to her victim.

Her 10 police statements led to Mr Jolly repeatedly being arrested between September 5 and December 14 – on one occasion kept in custody overnight to appear in court – despite him always maintaining his innocence.

She also claimed he had called her from withheld numbers.  Stalked her, her friends and her new partner. Filmed her walking down the street and sent her the video.

That wasn’t enough. She accused him of  verbally and physically abusing her and made false claims she was using cocaine, smashing items in her house and put a brick through her nan’s window;

. She also accused him of threatening to stab her and her boyfriend.

Recorder Harris said: “You stated after he had been arrested the stalking became worse.

“You provided images of damage to property and you yourself, as to where you said he knifed you with a Stanley knife, and there was a scar on your chest.”

In her fourth statement on October 21, she claimed he’d told Mr Rice online: “Wait til I see her, she is getting a f***ing blade in her chest fully this time.”

Her allegations were so detailed and convincing that nobody would have thought she was making them up. The effects of her lies on her  then boyfriend have not been fully eradicated yet, and many men and women are raising awareness about the potential for callous and deceitful women to ruin the lives of innocent men.

Extra training of police officers may be needed to spot these types of women, but it is difficult to prepare for them. It is also important for relatively rare hoaxes like this not to take away from the usual seriousness of domestic violence, making it important for women to be generally believed when they make accusations against men, but not to quick to act without concrete evidence.