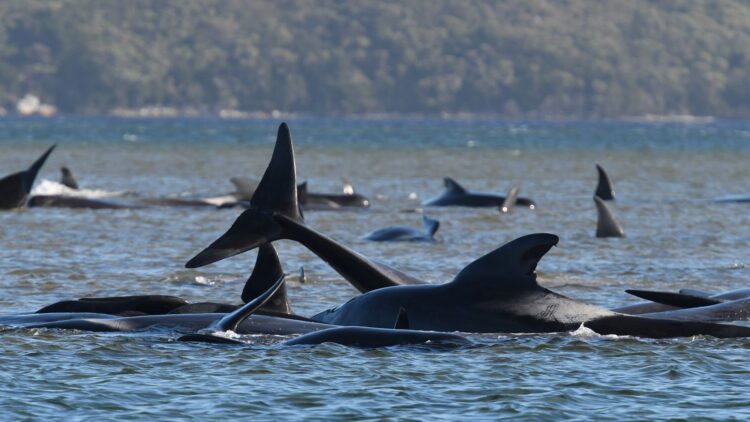 About 40  Australian government scientists, 20 police officers, and local fish farmers and volunteers, are involved in a major rescue attempt to save 180 whales stranded in one of the country’s beach event.

An estimated twenty-five of the  270 stranded whales have been returned to deeper waters, according to rescuers. However, Australian government scientists estimate about 90 of the stranded  whales have died.

Officials say prevailing wet, cool conditions, rough waters and the remote location have assisted  their chances of success, but the struggle continues.

Kris Carlyon, a wildlife biologist with the state government told a news conference on Tuesday: “It’s pretty ugly out there for people on the ground, but as far as the whales go it’s ideal. If the conditions stay the same they can survive quite a few days.”

One option is for specialised tarpaulins and pontoons to be used  to drag the whales to deeper water to bring out to sea.  Rescuers try to keep the whales upright to avoid disorientation.

Mr Carlyon said: “We’ve got animals that are semi-buoyant, so it probably won’t take too much to refloat those animals closer to the deeper water, and will involve just a bit of grunt from specialised crew in the water.”

He added that it was difficult to make a more specific estimate of deaths, since the whales were spread out across a large area, and some locations were inaccessible.

“This is a really challenging event,” he said. “In terms of mass strandings in Tasmania, this is up there among the trickiest we’ve ever had to deal with.”

The rescue teams of about 60 people, include volunteers, police, fish farms and the Tasmania Parks and Wildlife Service.