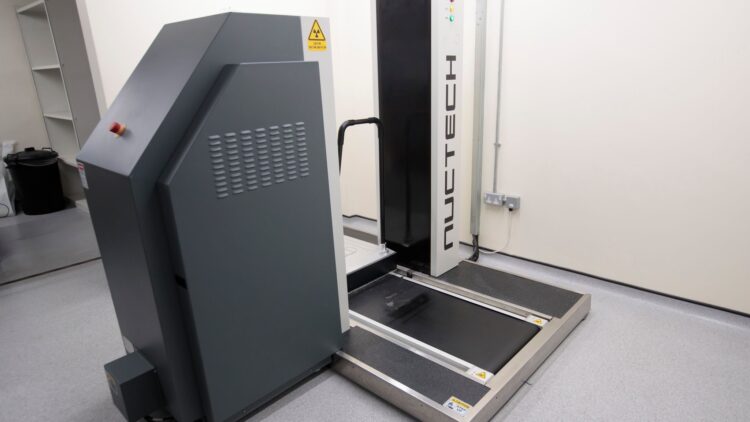 New X-ray scanners in Uk prisons  have intercepted almost 20,000 smuggling plots
Over 40 of the most challenging prisons have also been kitted out with an array of additional new technology including drug-trace machines and metal detection archways

Over the last 2 years, more than 70 cutting-edge X-ray body scanners have been installed in all closed male prisons, producing super sharp images of concealed contraband so staff can easily find and stop dangerous items from entering jails.

These scanners have thwarted almost 20,000 attempts to smuggle contraband on to wings, including one massive haul consisting of 81 individually wrapped white rocks of crack cocaine.

Biometric identification for visitors and drug-trace machines have also been successful preventing dangerous items from passing through prison gates under Government plans to cut crime in jails in England and Wales.

Building on this success, since the beginning of the year 42 of the most challenging prisons have been kitted out with even more high-end equipment. This includes new drug-trace machines that can detect microscopic smears of new psychoactive substances such as ‘spice’ on mail and items of clothing – stopping dangerous drugs from getting onto wings and wreaking havoc.

Gates at these prisons have also been beefed up with new metal detection archways and wands, extra drug dogs and biometric identification for the public. As a result, for the first time ever staff can effectively search visitors coming into jails and seize items such as phones and weapons that can fuel further crime and violence behind bars.

With this innovative new technology, we are enforcing our zero tolerance approach to drugs, knives and mobile phones in prisons. Illicit contraband endangers our hard-working staff and thwarts the efforts of other prisoners who are serious about their rehabilitation.

Alongside abstinence-based drug treatment, getting more prisoners than ever into work and improving facilities to maintain family ties, our strategy will make our streets safer and protect the public.

This success reflects record £100 million government investment in innovative technology to keep drugs, mobile phones and weapons out of jails.

The government’s ambitious plan to transform the prison estate and cut crime builds on this, as outlined in December’s Prisons Strategy White Paper.

Commitments in the White Paper include:

‘All new build prisons to be equipped with security measures that cut crime as standard, including the latest technological innovations to thwart drugs, phones and weapons; X-ray body scanners and biometric visitor identification.

‘New facilities to support those with drug and alcohol issues to turn their backs on debilitating addictions that stand in the way of proper rehabilitation, including abstinence-based therapy
A new Prisoner Education Service will help every prisoner leaving custody to gain the basics they need to find work on release.

Transparent prison performance data and new targets for prison governors, with an emphasis on reducing reoffending, improving safety and security, getting prisoners off drugs and improving basic skills such as numeracy and literacy.