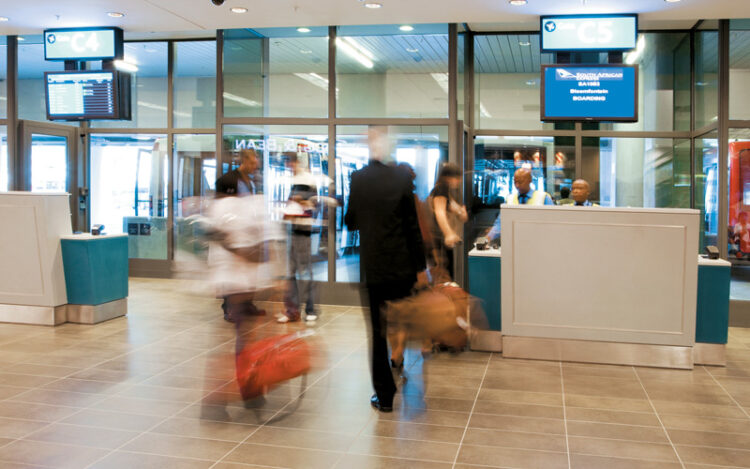 Brits are stuck in Portugal and South Africa after all flights from the two countries and Brazil were banned from entering the Uk due ti a new variant of the coronavirus found in Brazil.

The ban, which also covers the Central American state of Panama and the former Portuguese colony of Cape Verde, came into force at 4am this morning.

All flights to and from the countries on the banned list have now been cancelled, including routes to London Heathrow from Lisbon, ,Rio de Janeiro and Buenos Aires. Passengers stuck in those countries simply have to cope with situation.

One Twitter user from Manchester posted: ‘So I’m stuck in Portugal, how nice. I moved to a whole different country so I wasn’t stuck here – f*** you, corona.

The travel ban  applies to Portugal and Cape Verde – came into force at 04:00 GMT on Friday..

The ban was applied to Portugal  because of its strong links to Brazil – and the former Portuguese colony of Cape Verde off the coast of west Africa, as well as Panama in central America.

The ban comes after Brazil saw over 200,000 deaths and there is concern about the impact the new mutation could have on its health system.

However, the UK’s travel ban was prompted by fears of how quickly the new variant could spread through the region – since Brazil borders 10 countries.

Transport Secretary Grant Shapps has said the ban is “precautionary”, adding he “can’t provide an end date” to the new rules.

“We’re so close now, we’ve got three million of these vaccines in people’s arms in the UK,” he told BBC Breakfast.

“We want to make sure we don’t fall at this last hurdle.”

He told BBC Radio 4’s Today programme that he did not think the Brazilian variant was already in the UK “as far as we are aware”, adding that he did not believe there had been any flights from Brazil in the last week.

No evidence has been found to suggest that any of the variants cause more serious illness, and scientists are confident that vaccines should work against them.

According to Felipe Naveca, deputy director of research at the Brazilian state-run Oswaldo Cruz Foundation, the new variant’s origin was “undoubtedly” from the Amazon region.