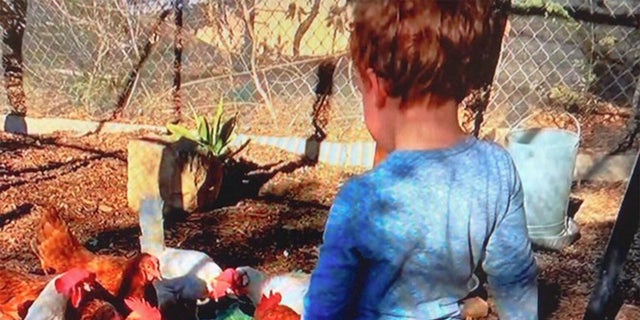 Meghan Markle appears to be hiding her son Archie’s face from the public, after she released  photo of her son when she made an appearance on The Ellen DeGeneres Show on Thursday.

In the picture, the two-year-old,  was backing the camera, and can be seen collecting eggs from his chicken coop, Archie’s Chick Inn, at the Sussexes’ Montecito home.

He  was sporting a blue jumper with jeans and yellow Hunter x Peppa Pig wellington boots.

It is unclear why she chose a picture of Archie backing the camera, but a good guess is that she is paranoid that online trolls may choose to make abusive or racist comments, or may not want the public to be updated with his potentially changing look, if she is worried about him getting identified.

It still leaves a sour taste in the mouth of royalists and members of the public who expect the Duchess Of Sussex to either release a full picture of her son, or release no picture at all. Whatever her reasons, it is messy.

Bot Sentinel issued a report that found 83 accounts coordinated to abuse Meghan Markle on Twitter, making her the target of a coordinated social media hate campaign .

Those analytics confirmed ill feeling against her, particularly from the British public, a high percentage who have taken a disliken to her before and even after her interview with Oprah Winfrey, in which she made several allegations against the royal family, including that of racism.

The fall out from that interview which saw Piers Morgan and The Society Of editors chief, Ian Murray, lose their jobs, led to a backclash from the British public- the public divided into those strongly against her, and those strongly defending her.

The other  possibility  that explains  why young Archie may have  been hidden from the camera, may be that he had a mark on his face she did not want captured on film, if for instance he had recently fallen down accidentally and sustained a mark.

It is not the first time, Meghan markle has published a picture of her son backing the camera.

Last May, she released two photographs of Archie, one featuring him looking down, and another showing him backing the camera, leading to complaints from observers.

Analyst Amber Smart said : ‘Meghan’s decision to release a picture of ehr son backing the camera will not go down well with many people, but those complaining will  alsonot consider the fact Meghan’s decision to try to mask her son’s face when she can may be a psychological reaction to the hate mail she has received since she married into the royal family’.

The precise reason Meghan Markle shared the photo of Archie backing the camera is unknown, but it likely to have been deliberate, and connected to the latest twitter campaign against her. She is growing paranoid about the public being updated with her son’s looks.

The Duke and Duchess have not  yet shared share a photo of their daughter, Lilibet, who was born in June.

Several family photos could be seen on Meghan’s desk in a special video to mark her 40th birthday in August.

During the interview, which aired on Thursday, Meghan shared updates about family life in the US, revealing how she and Harry celebrated Halloween with their children.

The Duchess said: “We wanted to do something fun for the kids but the kids were just not into it at all. Archie was a dinosaur for maybe five minutes…”

Ellen, who joined the Sussexes for the annual holiday, replied: “No, not even for five minutes, finally Harry talked him into having the head on, but Lili was a skunk.”

Meghan laughed and added: “She was a little skunk… like Flower from Bambi.”

In the interview, Ellen, who is Meghan and Prince Harry’s Montecito neighbour, reveals that “Lili’s now teething” before Meghan jokes that she is looking for ideas to help relieve the pain to which Ellen replies: “Tequila, anything.”

The interview is her first since the fall out from her interview with Oprah Winfrey back in March.

Her critics have several times in the past atatcked her for using her royal titles and position to court publicity, contrary to royal protocols.

However, since Prince Harry and Meghan Markle stepped away from royal duties, Meghan sees herself as a free agent who can operate as she pleases, but many commentators feel she should be keeping a low profile and preserving royal tradition, despite her stepping back from royal duties.

Meghan recently wrote an open letter to Congress in support of family paid leave. Her intervention was criticised as unnecessary interference in political matters, not expected of one sensitive to royal tradition.

The Duchess of Sussex, was also applauded for “leaving no stone unturned” after sending a letter to Congress in order to achieve more inclusive paid leave in the States. The Duchess addressed Senate Majority Leader Chuck Schumer and House Speaker Nancy Pelosi in her letter.

A poll conducted by TMZ  of over 19,000 people, revealed that 62 percent said they thought it was inappropriate for the Duchess to use her title if she was going to participate in politics.

This is a matter to be explored further in detail.