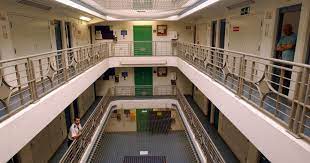 It is part of the new technology across England and Wales to bolster defences against drugs, weapons and mobile phones part of the government’s £100 million package to tackle violence and boost security

It is part of the new technology across England and Wales to bolster defences against drugs, weapons and mobile phones part of the government’s £100 million package to tackle violence and boost security

The innovative equipment, rolled out across the closed male estate in England and Wales, is part of the government’s bold £100 million package to boost security in prisons and crackdown on crime behind bars.

The 74 scanners, developed specifically for the Prison Service, allow staff to instantly identify whether prisoners are smuggling illegal contraband items within their bodies. The scanners have picked up Spice, morphine tablets, mobile phones, SIM cards, phone chargers and tobacco. These illegal items would have been destined for the prison wings, fuelling the illicit economy that drives debt and associated violence.

At HMP Garth a prisoner was found to be in possession of an iPhone and charging lead during a body search. The scanner revealed a large package in his bowel, later discovered to be full of tobacco, and HMP Berwyn banned items found on the same day the scanner was installed – showing the impact of value of these machines.

”Drugs and weapons wreak havoc behind bars and stop frontline staff from doing their crucial work to rehabilitate offenders and cut crime.

Our new scanners help us keep out dangerous and illegal items from prison that means our staff can create a better environment to get offenders off drugs and into work – which is the key to reducing reoffending.

Joanne Sims, Governor of HMP High Down said:This equipment is proving to be a successful deterrent to anyone wanting to smuggle illegal items into our establishment.

The X-ray body scanner supports our aim to provide a safe environment for our prison officers and the men in our prisons.

The cutting-edge technology has been installed at 73 sites meaning 100% of the closed male estate have the X-ray scanners, ensuring that there are no vulnerable points.

The equipment is being funded as part of the government’s commitment to transform the prison estate and cut crime. This includes:

£100 million to bolster prison security, clamping down on the weapons, drugs and mobile phones that fuel violence, self-harm and crime behind bars, including X-ray body scanners, drug dogs and enhanced gate security. £4 billion to provide 18,000 additional prison places and create modern, efficient jails that rehabilitate offenders, reduce reoffending and keep the public saf£156 million to tackle the most pressing maintenance issues to create safe and decent conditions for offender rehabilitation.