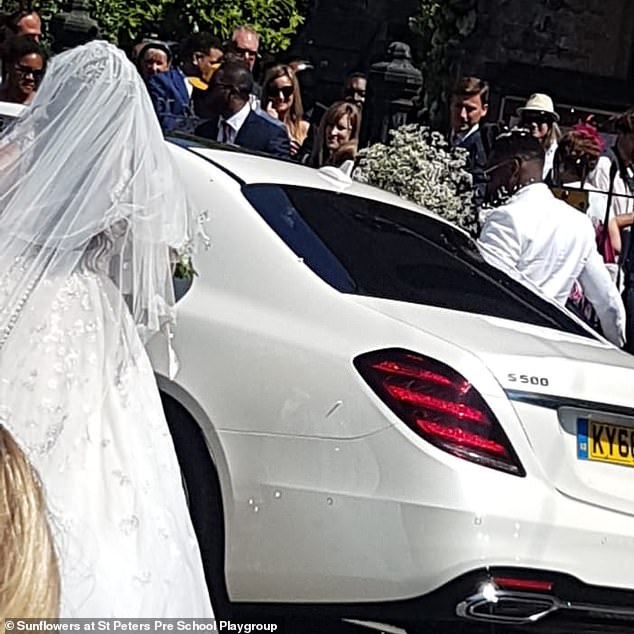 Tinie Tempah held a stunning private wedding watched by school kids through a fence, it was today revealed.

The 30 year old rapper married his wife in a  privately held wedding  at St Peter’s Church in Cirencster. The private wedding for friends and family was secretly arranged to avoid media attention, much of which they achieved on Thursday when only local media reported on the wedding later that day.  Once on social media, word of their marriage soon got out. Staff are said to  have been amazed when the star used their loo ahead of his wedding.

Pictures of the Brit Award winner and his new wife were shared on social media by local residents, after they watched through their school fence and  listened in awe to a Gospel choir sing for nearly 45 mins, sources said. Lisa Mckie, who runs a pre-school play group near to St Peters Church where the wedding took place told reporters that she met both the bride and groom. The south London rapper who scored his first number one with his debut single Pass Out in 2010.

She said the musician had asked to use the hall’s facilities, then the bride arrived and Ms Mckie said the first she knew was when the priest of St Peters, Father Isidore Nnamdi Obi, said there was going to be a celebrity wedding. She said that at about 12:30 on Thursday they became aware of “lots of cars and security in St Peter’s Road”.

“Then there was a knock at the door, two guys wanting to use our facilities,” she said.

“Unbeknown to my colleague [one] was Tinie Tempah.” Of the arrival of the bride, she said: “She spent about half an hour getting her skirts ready, putting her veil on, spraying her perfume.

“Then two London double decker buses came down the road and all these most amazing people who were dressed beautifully, stepped off.”