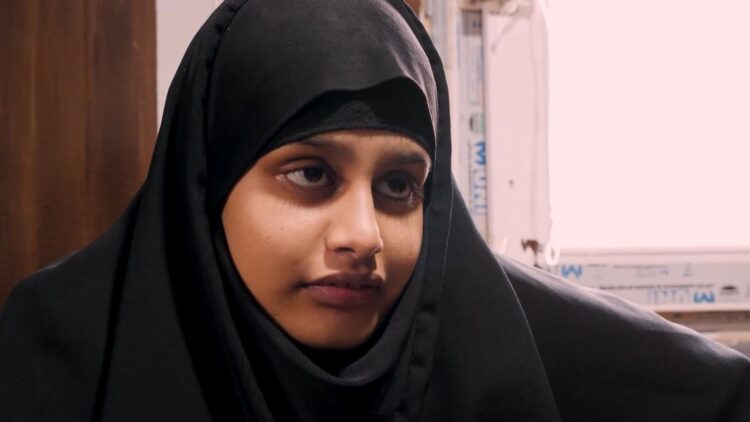 Shamima Begum- the woman who left Britain as a schoolgirl to join Islamic State (IS) in Syria, was likely to have been the victim of child trafficking and sexual exploitation, a court has heard.

Lawyers acting for Begum (pictured)began a new appeal on Monday against the removal of her British citizenship at a hearing of the Special Immigration Appeals Commission (Siac).

Her lawyers have compiled a series of experts to give evidence, including doctors and psychologists, who are experts in assessing how the adolescent mind affects judgment.

Begum is said to have been lured to Syria in 2015 when she left east London as a 15-year-old GCSE student, along with two school friends.

Her transfer into Syria, across the Turkish border, was assisted by a Canadian double agent, her lawyer added.

Once she arrived in Syria, she married an IS fighter and gave birth to three children, all of whom died as infants. When Begum was discovered in a Syrian camp in 2019, former home secretary, Sajid Javid, prevented her returning to the UK by revoking her UK citizenship.

The appeal also heard from MI5, who said Ms Begum was an A-star pupil and it was “inconceivable” that she did not know what she was doing.

Dan Squires KC, for Ms Begum, said, in submissions: “It is clear that ISIS deliberately and successfully recruited underage girls for the purpose of sexual exploitation and in particular for the purpose of child marriage – which, under international law, is considered a forced marriage – and the bearing of children, which was an important feature of its state-building project.

Samantha Knights KC, representing Begum, said on Monday that this “over-hasty” decision made Begum “effectively an exile for life”.

She told the hearing: “This case concerns a British child aged 15 who was persuaded, influenced and affected with her friends by a determined and effective [IS] propaganda machine.”

Begum’s lawyers said in written arguments that the Home Office had revoked her citizenship “without seeking to investigate and determine whether she was a child victim of trafficking”.

They also argued there was overwhelming evidence that Begum was “recruited, transported, transferred, harboured, and received in Syria for the purposes of sexual exploitation”.

Begum is also challenging the removal of her citizenship on the grounds that it made her “de facto stateless” and that the decision was predetermined.

Lawyers representing the Home Office said Begum’s case was about national security rather than trafficking. An unnamed British intelligence officer who gave evidence from behind a screen said it was “inconceivable” that someone traveling to Syria to join IS in 2015 “would not know what [IS] was doing as a terrorist organisation”.

“In some respects she would have known what she was doing and had agency in doing so.”

The officer added: “I think it’s worth noting how MI5 are experts in national security threats and not the definition of trafficking. We consider whether someone is a threat and it is important to note we recognise that victims can be threats if someone is a victim of trafficking.”

The witness noted Begum was predicted high grades in her exams, suggesting she was presumably intelligent and capable of critical thinking.

James Eadie KC, representing the government, said in written arguments that Begum had aligned with IS and stayed in Syria for four years until 2019.

Eadie said Begum left IS territory “only as the caliphate collapsed”, adding: “Even at that stage, the evidence demonstrates that she left only for safety and not because of a genuine disengagement from the group.”

He added: “When she did emerge and gave multiple press interviews shortly before the secretary of state decided to deprive her of her citizenship, she expressed no remorse and said she did not regret joining [IS], acknowledging that she was aware of the nature of the group when she travelled.”

The hearing at Field House tribunal centre is expected to last five days.

Speaking before the hearing, the UK immigration minister, Robert Jenrick, told Sky News it was a “fundamental principle” that “where people do things which undermine the UK interest to such an extent, that it is right for the home secretary to have the power to remove their passport.”

A book published earlier this year by the journalist Richard Kerbaj alleged that Begum and her friends were taken into Syria by a Syrian man who was leaking information to the Canadian security services.

Mohammed al-Rashed is alleged to have been in charge of the Turkish side of an extensive IS people-smuggling network.

In a statement, Maya Foa, Reprieve’s director, said: “Most British women in north-east Syria were groomed, coerced or deceived by [IS], which operated as a sophisticated trafficking gang. British women, many of whom were young girls at the time, were held against their will and subjected to sexual and other forms of exploitation.

“The UK government has been found to have unlawfully stripped British nationals of their citizenship, to have rendered British children stateless, and to have created a situation where families risk being torn apart because they no longer have the right to remain in the same country as each other.

“Shamima Begum was groomed online as a child and taken to Syria by a Canadian intelligence spy. She should be protected as a trafficked British teenage girl would be in any other context.”

Ms Begum travelled to Syria in 2015, with her citizenship stripped on national security grounds in 2019.

A five-day immigration hearing is considering an attempt to challenge the removal of her UK citizenship.

The Home Office insists she continues to pose a threat to national security.

The case is being heard at the Special Immigration Appeals Commission (SIAC), which has similar standing to the High Court, and can hear national security evidence in secret if necessary.

Lawyers for Ms Begum, now 23, told the court that a decision by then-Home Secretary Sajid Javid to remove her British citizenship was unlawful, as it did not consider whether she had been a child victim of trafficking.

She remains in a camp controlled by armed guards in northern Syria, nearly eight years after running away from home aged 15 alongside two other east London schoolgirls – Kadiza Sultana, 16, and 15-year-old Amira Abase.

Ms Sultana is believed to have been killed in a Russian air strike in Syria, according to her family’s solicitor.

The whereabouts of Ms Abase are unknown, but Ms Begum previously said in a 2019 interview that she had heard she might still be alive.

In August, a BBC News investigation revealed Ms Begum was smuggled into Syria by an intelligence agent who was working for Canada at the time. The Canadian government has said that it will “follow up” on the allegations.

In 2019, she was found by the Times newspaper, nine months pregnant, in a Syrian refugee camp. Her baby later died of pneumonia and Ms Begum said she had previously lost two other children.

In an interview with BBC News in September 2021, Ms Begum said she would regret joining the Islamic State group (referred to as IS, ISIS and ISIL) for the rest of her life and offered to help the UK fight terrorism.

Ms Begum previously said the 2017 Manchester Arena bombing, in which 22 people – some of them children – were killed in a bombing claimed by IS, was similar to military strikes on IS strongholds and called the terror attack “retaliation”.

It has been almost eight years since Shamima Begum disappeared from east London with two school friends. They were heading to the Islamic State group in Syria.

For more than a year, I have been talking to her in a dusty detention camp in north-eastern Syria. It is where Shamima and other women and children who are associated with IS are held.

Throughout an exclusive series of interviews for the I’m Not a Monster podcast and a BBC Two documentary, Shamima claimed that she is a victim of trafficking and that before she left the UK, she was sent detailed instructions by IS members about how to make it there.

She has also said that she would have never made it to Syria without the help of an IS people smuggler, by the name of Mohammed Al Rasheed.

Ms Begum’s lawyers argued at a tribunal on Monday that the evidence she was a child victim of trafficking is “overwhelming” and “depriving her of her British citizenship was a disproportionate means of addressing any alleged national security risk”.

Samantha Knights KC said: “At its heart, this case concerns a British child aged 15 who was persuaded, influenced and affected with her friends by a determined and effective ISIS propaganda machine.”

She added that “over-hasty steps” deprived her of her citizenship forever.

Lawyers for the Home Office argued the decision to deprive Ms Begum of her citizenship was correct, saying she fled from IS territory “for safety”, not “disengagement from the group”.

They told the court that, in “multiple press interviews” before Mr Javid made his decision, she expressed “no remorse and said she did not regret” joining a terrorist organisation – also arguing she had acknowledged she was “aware of the nature of the group when she travelled”.

A formal assessment made by the UK security service MI5 says that people who travelled to IS-controlled territory “will have been radicalised and exposed to ISIL’s extremism and violence”, with the security service further assessing anyone returning as a national security threat.

During the hearing, Ms Begum’s lawyers pressed an MI5 officer, known as Witness E, whether the security service had considered if Ms Begum was a victim of trafficking when assessing her national security risk.

The Home Office also said that information given to the police in November 2015 showed she had no desire to return home and still supported ISIL after her arrival in their territory.