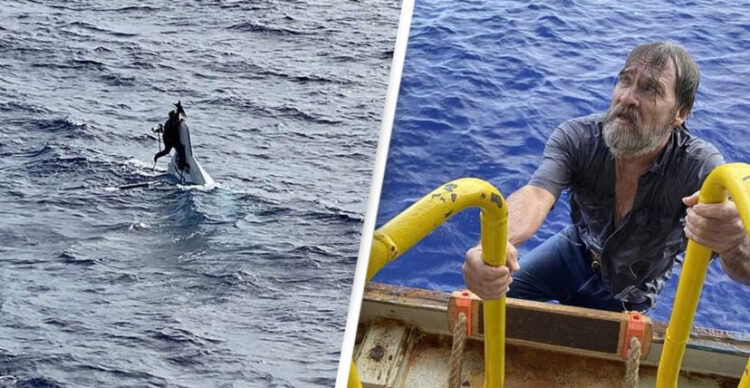 A 62-year-old sailor who went missing off the east coast of Florida has been found  clinging on to his capsized boat nearly two days later.

Stuart Bee was miraculously found alive, 86 miles away from the coast, after 43 hours of clinging onto his 32-foot motorboat, Stingray.

Alarms were first raised when Bee didn’t come home from his trip on Friday, November 27, after setting off at around 4.00pm in the afternoon. His motorboat is thought to have suffered some kind of mechanical issue on the Saturday, November 28. Bee was then woken up in the night, when water began pouring into the boat, forcing him into the front hatch, at around midnight.

After sunrise he spotted the Angeles, so he took off his shirt and began waving it in a bid to get the crew’s attention.

Wide searches by the U.S Coast Guard  with the help of a Hercules C-130 aircraft were employed, but it wasn’t until Sunday morning, November 29, that Bee was spotted by a passing container ship, as he held onto his boat for dear life.

Crew working on the 225-foot container, called Angeles, helped to rescue the 62-year-old and brought him back to the shore, after 43 hours stranded at sea. Although he is an experienced sailor, his motorboat is thought to have suffered some kind of mechanical issue on the Saturday, November 28.

Bee was then woken up in the night, when water began pouring into the boat, forcing him into the front hatch, at around midnight.

Lacruiser P. Relativo, a merchant mariner, who was onboard the Angeles took a photo with Bee and gave him fresh clothes to wear. He told Daily Mail.Com

‘I choose to offer him my ‘lucky shirt’. I could give him a new one but this 1 is my favorite. I wish him the same comfort this shirt has given me during those tiring job interviews. Just like him, I was lucky to get the job. He was lucky too that our course crossed near Atlantic,’ he wrote on Facebook.

Relativo explained: ‘I was awakened by a call with sense of urgency that we need to rescue someone. As merchant mariners, we were trained to the toughest degree of distress that can possibly happen at sea.

‘However, the actual scene often different. After careful maneuvers, we successfully rescued Mr. Stuart. Before I could start questioning, he first asked me “What day it is today?”, “November 29!”, I responded.

‘By the look on his face, I saw his teary eyes as he made sign of the cross. He was drifted in the open sea for days, maintaining his stance at the top of his capsized boat, to not make any single move as it may trigger his yacht to sink fully.’