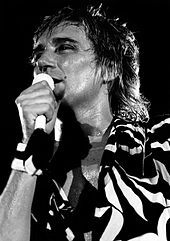 Rod Stewart has cancelled his scheduled dates at the o2 due to a throat infection.

The acclaimed singer, credited for his hot singing voice was due to play at the 02 in Greenwich next Tuesday, Friday and Saturday. However, due to a throat infection, he was forced to cancel the scheduled dates.
The dates have now been rescheduled for December 12, February 26 and February, making it embarrassing after he initially announced on twitter that only one date would be cancelled.However, insiders said Stewart had to follow medical advice from his doctors to rest more and postpone his business engagements for the sake of his health
Some consolation to his fans is the news that tickets remain valid, and a full refund is available from sellers for those who are unable to make the new date of December 12. Fans now have no choice but to wait until February before they can see their favourite  star perform. services to music and charity and was also included on the Queen’s birthday honour list.
Rod Stewart is one of the longest serving artists to the music industry and has sold over 200 million albums in a fledging career spanning several decades. His true contribution to music is understated, but he remains one of the leading and  respected voices in music.
The cause of Rod Steward’s throat infection is unknown, though quite concerning is the fact that his voice is key to his career and success. It is always ironic when an artist loses the very weapon of his or her trade; a throat infection for a singer is like a footballer breaking his legs. The difference being that football involves competitive interaction with other footballers, inevitably embodying physical challenge.
Singing on the other hand primarily involves practise and commitment, a smooth throat almost certainly taking for granted as an essential and basic tool of the business.  Throat infections can be caused by smoking or bacteria contracted from kissing, though the latter is less common than the former.
Spread the news
1
1
Share