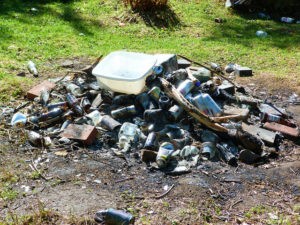 A group of travelling gipsies have been forced to quit a Birmingham school, following a standoff with police.

Over 100 fridges had been dumped in Ithon Grove last Monday, causing outrage among the locals.
The authorities have promised to prosecute those responsible, but that’s if they can find them
A convoy of about 20 caravans, and scores of adults and children, with their dogs had been at Shenley Academy since Friday , keeping hundreds of pupils at home instead of returning after the half-term break. Travelers move round the country, settling anywhere most convenient with their caravans. They have a strict tradition of keeping relationships within the family of travelers and also generally maintain a training and fitness regime which often comes with an unattractive brovado from many of their men.

Travelers can be very friendly but also disruptive. It always depends on which set of travelers are on the scene. Students had been returning from half term when they were presented with an excuse to stay home for longer periods because of the presence of travelers who were strangers to the school. It is strange that the travelers chose to settle in a school, ignoring the strong likelihood that they would be confronted by the school authorities once their presence was discovered. Unless they thought the school would be closed indefinitely, it wasn’t a wise choice to make.
As the travelers began to evacuate the school premises, it emerged that another spot for them to settle not far from the school, had been prepared for them.

Many students in the area are said to have felt very uncomfortable with the presence of the travelers in their school premises, with some threatening to extend their half term holiday. Parents and students have since been assured by the police that the travelers have now left, and police will be patrolling the area to ensure none of them come back.