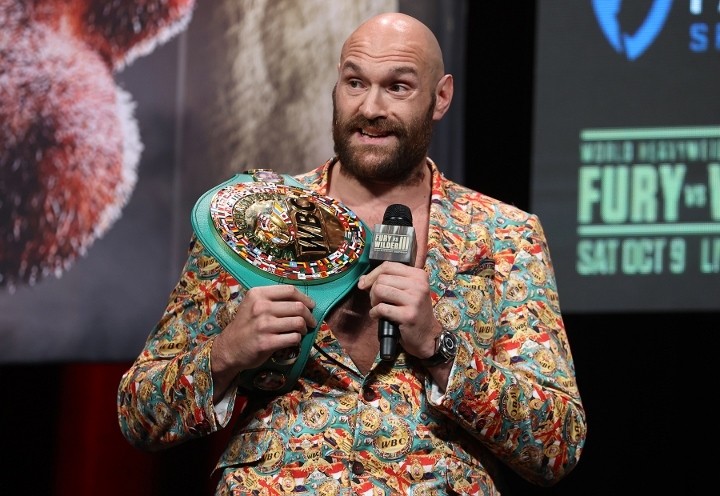 Tyson Fury reacted angrily to repeated claims from Deontey Wilder that the gypsy king cheated in their original rematch  in February 2020.

In their final press conference for this weekend’s  world cbampionsnip fight, Wilder insisted he wasnt deluded about the claims , saying he will believe what he wants, and take it to his grave.

Fury accused the American of being a liar who is mentally weak, as he vowed to repeat the brutal defeat that saw Wilder lose both his belt and his unbeaten record.

The Englishman laughed: “He has got no shirt on to copy me.

“I am famous for that, everyone wants to be like me, the Bronze Bomber needs to stop copying the Gypsy king.
Meanwhile, Wilder accused Fury and his team of lying about the cheating allegations.He said: “I don’t regret the claims I made and I will go to my grave believing it because I have confirmation “Men and women lie but the eyes can’t, the eyes .

“I am now a better man and fighter because of what I have learned and know.

“The truth sets you free so there is no pressure on me, it’s all on him, I have nothing to lose and everything to gain. My energy is like my mind, it is very violent.”

But Fury added: “I knocked you out dosser! You are a weak man and you are getting knocked out.

“I have come here looking a million dollars and you have turned up looking like a tramp.

“He is a lying little dosser and and an insecure little s***. He has been done, beaten, busted.

Wilder will no doubt be planning to do a lot about his belief he was cheated last time out, the allegations themselves making this clash quite intriguing.

The American’s camp have in the past in the past few months expredsed confidence their man will knock Fury out in five rounds in this fight.