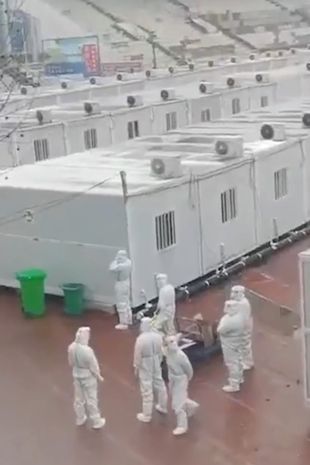 Families in China are being forced to live in quarantine camps under its  recent  stringent lockdown regime, with massive cabins built to accommodate those who have contracted the virus.

One of the videos  show the cubicles to be located on the grounds of a sports stadium, with many other locations believed to have been used for   Some reports claim that extreme lockdown measures are being taken following a spike in coronavirus cases ahead of the Beijing Winter Olympics.

Another video coming from inside one of the metal buildings reveals  the occupant revealing the restricted space containing one bed and a small, seemingly grimy bathroom.

A further video shows staff leaving trays of food on shelves outside the units, all while dressed in protective clothing, while a fourth video shows a child looking through bars on a window, with the poster claiming that ‘Sometimes kids will be locked alone without their parents guardianship.’

Many thousands are believed to have been moved into the camps in a bid to combat the effects of the pandemic in China. Another video reveals people in hazmat suits giving food to those held there.

In others, lines of buses allegedly ready to head to the camps are seen. Other reports suggest men, women, children and the elderly have all been among thousands detained in the camps.

China, which is one of the world’s most draconian system of governance is exercising a brutal level of zero tolerance on the virus, subjecting its citizens to the most inhumane conditions in attempt to keep the transmissibility of the virus in check.

They continued: ‘Nobody has come to check up on us, what kind of quarantine is this? They did a big transfer of us, more than a thousand people, in the night and many of us are elderly people and children. They didn’t make any proper arrangements and so they just carelessly placed us [here].’

Footage allegedly taken from the facilities comes after authorities in Xi’an enacted drastic measures in the city, which fell at the centre of China’s latest coronavirus outbreak. All 13 million of its residents were told to stay indoors and restricted from leaving even to buy food or supplies.

China has always been an extreme country with extreme attitudes.

The government only recently in October 2015,  announced plans of the government to abolish the one-child policy, now allowing all families to have two children, citing from a communiqué issued by the CPC “to improve the balanced development of population” .