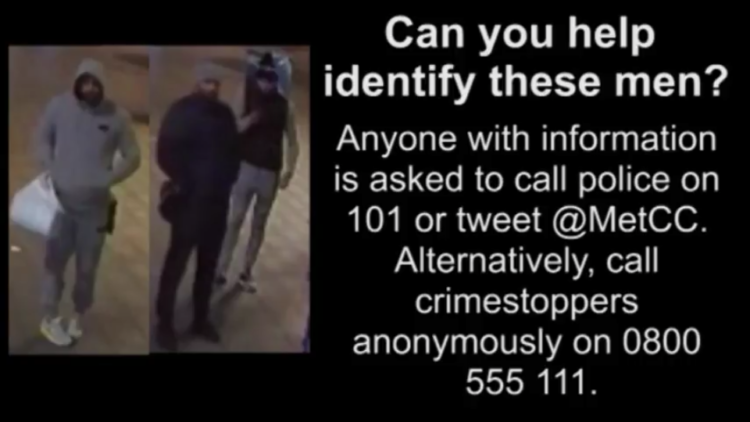 CCTV footage of three men has been released  by police, after after  the robbers beat and tied up a jewellery shop manager before taking off with with £50,000 worth of goods.

The men had  pretended to be selling  goods. but it was only a while before their true intention became clear.They eventually  became violent when the manager at Turquoise jewellers in Barking, rejected their offer on Tuesday, December 27.

Shortly before 8.40am, police were called and found the manager, a 45-year-old man, suffering from head and facial injuries and £50,000 worth of jewellery taken.

He was taken to an east London hospital by medics for treatment to his injuries, which were not life-threatening.

The robbers punched their victim  several times in the face, over the head, and then proceeded to tie them up being tied up. They then emptied the house of £50,000 worth of jewellery, as one of their accomplices stood guard over the shop’s vicinity outside. The careless error the crooks made was in failing to take into account the widespread availability of CCTV these days. In fact, it was stupid, and the senseless gang are poised to be caught for their selfish and evil act. They made way with the money, but their identities will quickly spread, eventually bringing justice to their victim. Money is a strong and important weapon, but subjecting a fellow human to a violent assault just to obtain money is extremely unprincipled and immoral. These guys obviously have no principles of morals, and as said several times on this site, they simply reflect their negative and failed childhood.

It highlights the importance of raising children in a good family environment and training them well. Children also are required to respond to training by their parents – which includes serious commitment to their education.
An early determination of one’s ambitions is very crucial in life, most of those who develop aimlessly could end up like these lethal thugs. They sure have guts, but did not do an awful lot of thinking before they set out on their money making mission. In this day and age, CCTV should be the first thing in the minds of criminals before they carry out one of their selfish and egoistic criminal attacks. The trouble many will discover is that CCTV cameras are not always located where they can easily be detected by criminals, although some criminals are just to excited to think properly before they strike. Some are indeed daft, but others are just plain stupid and ridiculouky careless,

The first suspect is described as a white man with a black beard wearing a grey bobble hat, dark blue jacket with a tartan hessian laundry bag over his shoulder, dark trousers and black trainers.

The second  suspect is described as a white man with a black beard wearing a dark body warmer over a grey top, a dark bag across his waist, grey jogging bottoms and dark trainers with yellow soles.

The third suspect 3 is described as a stocky white man with a beard wearing a grey hooded top, grey trousers and white trainers.

DC Andy Davenport, leading the investigation, said: “This is a shocking incident that has left the victim very traumatised after his ordeal.

“We are keen to identify the three men in the CCTV footage so we can speak to them about the incident. We would also urge anyone who witnessed the incident to contact us.”

We can be sure that one of their rivals or an old flame will shop these guys, and hopefully teach them never to treat human beings like this again, just for the sake of £50,000, which they will split.