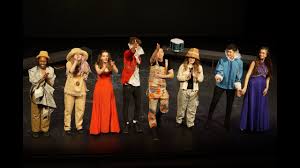 Young people from the  Bedford Young Theatre are visiting Albacete, Murcia, Toledo and Madrid to perform Romeo and Juliet as part of their joint debut.

The actors and actresses are between the ages of 16 and 21, and hail  from Bedford schools and the University of Bedfordshire , and have been busy rehearsing for the last three months in preparation for the eight performances from December 10-13. Spanish actress, María Graciani has directed the play has also made all the costumes. It was her idea to tour the play in Spain

The actors are aware of the need to stay on top of their academic work whilst rehearsing for their big debut, but have matters under wrap.  have already fitted everything in with their school and university commitments – will put on two performances every morning and often have to pack away all the props, get on a bus and move on to the next town straight away.

A source from Bedford Young Theatre told The Eye Of Media.Com: ” these are amazing and committed youths with an immense amount of talent. We are proud to see talents like these harness their talents in such a conducive environment”. Bedford Young Theatre was established in 2016 to establish a bridge between Spanish and English Cultures through the experience of theatrical productions. Our productions are our own unedited creations, in which we adapt the scripts of classical or contemporary authors to present our own interpretation of the works